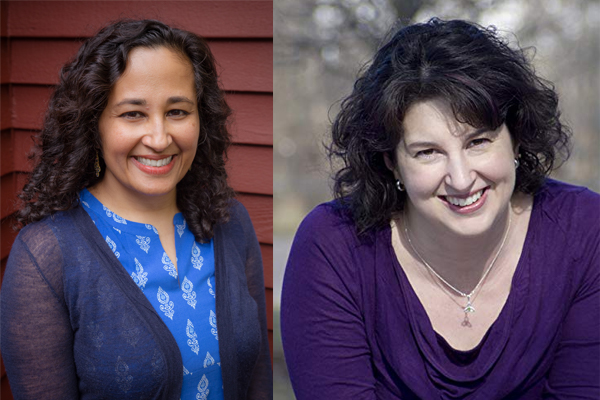 It’s an afternoon full of mayhem and secrets! An Unlikely Story is hosting two middle grade authors, Rajani LaRocca, author of MIDSUMMER’S MAYHEM, and Erin Dionne, author of SECRETS OF A FANGIRL. MIDSUMMER’S MAYHEM is a retelling of Shakespeare’s A MIDSUMMER NIGHT’S DREAM with a competitive baking twist. SECRETS OF A FANGIRL follows one girl as she tries to balance the “popular” and “nerdy” versions of herself. At the event, Rajani and Erin will talk about their books, answer audience questions, and sign copies of their books.

ABOUT MIDSUMMER’S MAYHEM:
Can Mimi undo the mayhem caused by her baking in this contemporary-fantasy retelling of Shakespeare's A Midsummer Night's Dream?

Eleven-year-old Mimi Mackson comes from a big Indian American family: Dad's a renowned food writer, Mom's a successful businesswoman, and her three older siblings all have their own respective accomplishments. It's easy to feel invisible in such an impressive family, but Mimi's dream of proving she's not the least-talented member of her family seems possible when she discovers a contest at the new bakery in town. Plus, it'll start her on the path to becoming a celebrity chef like her culinary idol, Puffy Fay.

But when Mimi's dad returns from a business trip, he's mysteriously lost his highly honed sense of taste. Without his help, Mimi will never be able to bake something impressive enough to propel her to gastronomic fame.

Drawn into the woods behind her house by a strangely familiar song, Mimi meets Vik, a boy who brings her to parts of the forest she's never seen. Who knew there were banyan trees and wild boars in Massachusetts? Together they discover exotic ingredients and bake them into delectable and enchanting treats.

But as her dad acts stranger every day, and her siblings' romantic entanglements cause trouble in their town, Mimi begins to wonder whether the ingredients she and Vik found are somehow the cause of it all. She needs to use her skills, deductive and epicurean, to uncover what's happened. In the process, she learns that in life, as in baking, not everything is sweet.

ABOUT SECRETS OF A FANGIRL:
A cool girl who's secretly a major geek has to figure out how to be true to herself in this relatable, funny, feminist novel from Erin Dionne.

A cool girl who's secretly a major geek has to figure out how to be true to herself in this relatable, funny, feminist novel from Erin Dionne.

Sarah Anne loves lacrosse, and the MK Nightshade series that everyone was obsessed over in grade school. The problem is that she's still obsessed, which is way too nerdy for a popular kid like her. So she hides her geekiness with a set of rules meant to keep her geek and jock selves separate.

Except when she's offered a spot in a Nightshade fandom contest, where the winner gets to see the new movie premiere in LA. No one seems to think Sarah Anne can win, since she's up against a pair of guys in high school--but the more she's called a fake fan, the more determined she is to wipe the floor with her competition. As long as none of her friends or anyone at school knows what she's doing.

Can she keep her geek identity a secret, win the contest, and manage to keep her friends even though she's been living a lie? Sarah Anne is going to have to make some choices about what's truly important to her and which rules she's going to break to stay true to herself.

ABOUT THE AUTHORS:
Rajani LaRocca was born in India, raised in Kentucky, and now lives in the Boston area with her wonderful family and impossibly cute dog. She earned a BA and an MD from Harvard, and spends her time writing novels and picture books, practicing medicine, and baking too many sweet treats. Midsummer's Mayhem is her first novel. Find her online at RajaniLaRocca.com and on Twitter and Instagram @rajanilarocca.

Erin Dionne is the author of six other books for kids, including Lights, Camera, Disaster, The Total Tragedy of a Girl Named Hamlet, and Moxie and the Art of Rule Breaking. Erin loves action movies, especially Star Wars and The Avengers. Wonder Woman is her favorite superhero. She lives outside of Boston with her husband, two kids, and a very disgruntled dog. Visit her online at erindionne.com.

Secrets of a Fangirl (Hardcover)

The Total Tragedy of a Girl Named Hamlet (Paperback)

Moxie and the Art of Rule Breaking: A 14 Day Mystery (Paperback)