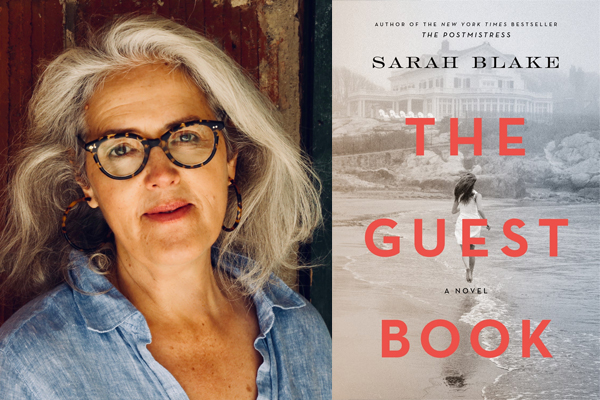 An Unlikely Story hopes readers have a comfortable stay during an event with Sarah Blake, the author of THE GUEST BOOK. From the author of the bestseller, THE POSTMISTRESS, comes a sweeping intergenerational narrative of the decline of a wealthy family from 1935 until the twenty-first century. At the event, Sarah will discuss her novel, followed by a question and answer session and a book signing. Beer and wine will be available for purchase at this event.

ABOUT THE BOOK:
From the New York Times bestselling author of The Postmistress comes a novel that is The Hours meets the Forsyte Saga, about a love affair between the daughter of a great American family and an upstart trying to break into polite society.

THE GUEST BOOK follows three generations of a powerful American family, a family that “used to run the world.”

And when the novel begins in 1935, they still do. Kitty and Ogden Milton appear to have everything—perfect children, good looks, a love everyone envies. But after a tragedy befalls them, Ogden tries to bring Kitty back to life by purchasing an island in Maine. That island, and its house, come to define and burnish the Milton family, year after year after year. And it is there that Kitty issues a refusal that will haunt her till the day she dies.

In 1959 a young Jewish man, Len Levy, will get a job in Ogden’s bank and earn the admiration of Ogden and one of his daughters, but the scorn of everyone else. Len’s best friend, Reg Pauling, has always been the only black man in the room—at Harvard, at work, and finally at the Miltons’ island in Maine.

An island that, at the dawn of the twenty-first century, this last generation doesn’t have the money to keep. When Kitty’s granddaughter hears that she and her cousins might be forced to sell it, and when her husband brings back disturbing evidence about her grandfather’s past, she realizes she is on the verge of finally understanding the silences that seemed to hover just below the surface of her family all her life.

An ambitious novel that weaves the American past with its present, The Guest Book looks at the racism and power that has been systemically embedded in the US for generations.

ABOUT THE AUTHOR:
Sarah Blake is the author of the novels GRANGE HOUSE and the New York Times bestseller THE POSTMISTRESS. She lives in Washington, D.C., with her husband and two sons.

The Guest Book: A Novel (Hardcover)