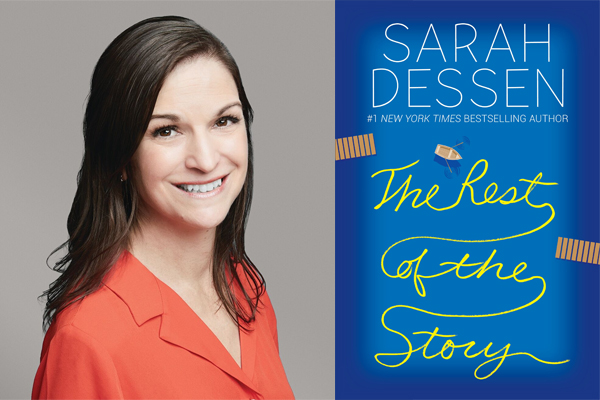 Legendary YA author Sarah Dessen will be here to discuss and sign her new book, THE REST OF THE STORY, a big-hearted, sweeping novel about a girl who reconnects with a part of her family she hasn't known since she was a little girl - and falls in love, all over the course of a magical summer.

Tickets will go on sale Tuesday, May 21st at 12:00pm and will include one copy of THE REST OF THE STORY and admission for one.

ABOUT THE BOOK:
The Rest of the Story is a big-hearted, sweeping novel about a girl who reconnects with a part of her family she hasn’t known since she was a little girl—and falls in love, all over the course of a magical summer, from #1 New York Times bestselling author Sarah Dessen.

Emma Saylor doesn’t remember a lot about her mother, who died when Emma was twelve. But she does remember the stories her mom told her about the big lake that went on forever, with cold, clear water and mossy trees at the edges.

Now it’s just Emma and her dad, and life is good, if a little predictable…until Emma is unexpectedly sent to spend the summer with her mother’s family that she hasn’t seen since she was a little girl.

When Emma arrives at North Lake, she realizes there are actually two very different communities there. Her mother grew up in working class North Lake, while her dad spent summers in the wealthier Lake North resort. The more time Emma spends there, the more it starts to feel like she is also divided into two people. To her father, she is Emma. But to her new family, she is Saylor, the name her mother always called her.

Then there’s Roo, the boy who was her very best friend when she was little. Roo holds the key to her family’s history, and slowly, he helps her put the pieces together about her past. It’s hard not to get caught up in the magic of North Lake—and Saylor finds herself falling under Roo’s spell as well.

For Saylor, it’s like a whole new world is opening up to her. But when it’s time to go back home, which side of her—Emma or Saylor—will win out?

ABOUT THE AUTHOR:
Sarah Dessen is the #1 New York Times bestselling author of over a dozen novels for teens including Once and For All, Saint Anything, This Lullaby, The Truth about Forever, Just Listen, and Along for the Ride. Her books have been published in over thirty countries and have sold millions of copies worldwide. That Summer and Someone Like You were made into the movie How to Deal. She is the recipient of the 2017 Margaret A. Edwards Award from the American Library Association for outstanding contribution to young adult literature. A North Carolina native, Sarah currently lives in Chapel Hill with her family. Visit Sarah at sarahdessen.com.