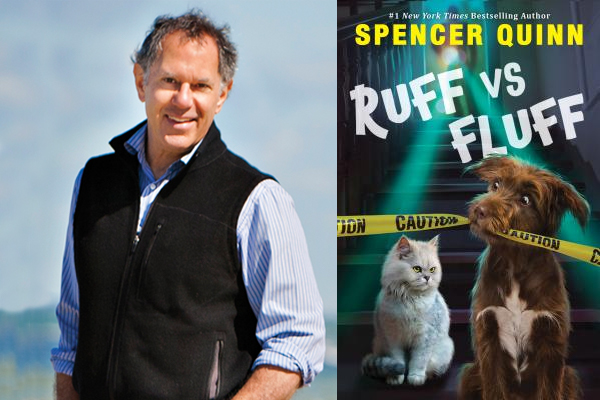 Come celebrate animal hijinks and mysteries with author Spencer Quinn and his new middle grade book, RUFF VS. FLUFF. After writing the bestselling Bowser and Birdie books, Spencer Quinn has created a new hilarious animal duo, Arthur the dog and Queenie the cat. They may hate each other, but they love the inn they live in, their humans, and sausages. When a cousin of their beloved family is blamed for murder, Arthur and Queenie need to put aside their differences to solve the case! It’ll be a great night for anyone who loves animals, mysteries, and general silliness!

ABOUT THE BOOK:
New York Times bestseller Spencer Quinn returns with a laugh-out-loud series about the most epic rivalry of our time . . . Arthur the dog vs. Queenie the cat.

From the outside, Queenie the cat and Arthur the dog appear to have a lot in common. Both pets live in the charming Blackberry Hill inn. They both love their humans, twins Harmony and Bro. They both have a fondness for sausage.

But that doesn't change the fact that they are mortal enemies.

Goofy, big-hearted Arthur loves everyone he's ever met . . . except the snobby, scheming cat who's devoted her life to ruining his.

Queenie is a bit choosier. And who can blame her? When you're brilliant AND exquisitely beautiful, you can't be expected to rub tails with commoners. Especially not slobbery dogs.

But when the twins' beloved cousin is framed for murder, Queenie and Arthur must work together to clear his name . . . something Queenie finds even more distasteful than inexpensive caviar. Can two enemies put aside their differences long enough to solve the mystery?

ABOUT THE AUTHOR:
Spencer Quinn is the author of the New York Times bestselling Chet and Bernie mystery books and the stand-alone novel The Right Side, both for adults. His novels for kids include the New York Times bestselling Bowser and Birdie novel, Woof, and the follow-up, Arf, as well as the Edgar Award-nominated Echo Falls series. Spencer lives with his wife, Diana, and dogs, Audrey and Pearl, on Cape Cod, Massachusetts.

Ruff vs. Fluff (A Queenie and Arthur Novel) (Hardcover)