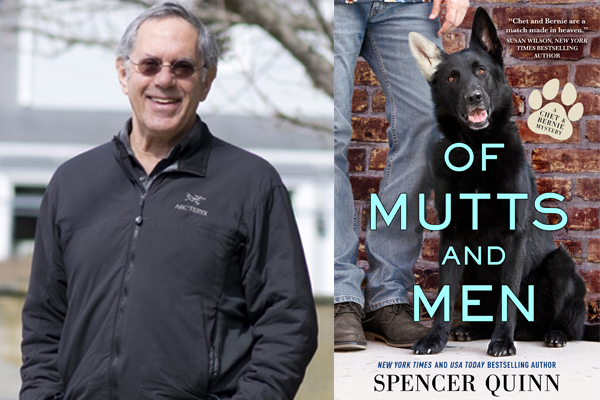 Grab a Slim Jim and get ready for a laugh-out-loud tale of deception and suspense. From Spencer Quinn, the bestselling author of the beloved CHET AND BERNIE MYSTERY SERIES, comes the tenth installment of the series, OF MUTTS AND MEN. In a virtual event, live on Crowdcast, Quinn will discuss his latest Chet and Bernie mystery, where the crime-fighting, dynamic duo, Chet the dog and his partner PI Bernie Little, are in more danger than ever, followed by a Q&A.

When you purchase Spencer Quinn’s new book, OF MUTTS AND MEN, through our website you will receive a personalized bookplate, while supplies last. In order to receive your bookplate you must fill out >>THIS FORM<<.

ABOUT THE BOOK:
Spencer Quinn's Of Mutts and Men is the latest in the New York Times and USA Today bestselling series that the Los Angeles Times called “nothing short of masterful"…

“I have been a Chet and Bernie fan from the start, and this is the best one yet—suspenseful, laugh-out-loud funny in places, and surprisingly tender. Chet is a wonderful narrator—top dog, you could say—but he never descends to cuteness, and Bernie is as tough a PI as Spade or Marlowe, a man as quick with his .38 as he is with a Slim Jim for his sidekick. I’m already jonesing for the next one.” —Stephen King on Of Mutts and Men

When Chet the dog, “the most lovable narrator in all of crime fiction” (Boston Globe), and his partner, PI Bernie Little of the desert-based Little Detective Agency, arrive to a meeting with hydrologist Wendell Nero, they are in for a shocking sight—Wendell has come to a violent and mysterious end. What did the hydrologist want to see them about? Is his death a random robbery, or something more? Chet and Bernie, working for nothing more than an eight-pack of Slim Jims, are on the case.

Bernie might be the only one who thinks the police have arrested the wrong man, including the perp’s own defense attorney. Chet and Bernie begin to look into Wendell’s work, a search that leads to a struggling winemaker who has received an offer he can’t refuse. Meanwhile, Chet is smelling water where there is no water, and soon Chet and Bernie are in danger like never before.

ABOUT THE AUTHOR:
Spencer Quinn is the bestselling author of the Chet and Bernie mystery series, as well as the #1 New York Times bestselling Bowser and Birdie series for middle-grade readers. He lives on Cape Cod with his wife Diana—and dogs Audrey and Pearl.

Paws vs. Claws: A Queenie and Arthur Mystery (Hardcover)

Bark vs. Snark : (A Queenie and Arthur Novel) (Hardcover)