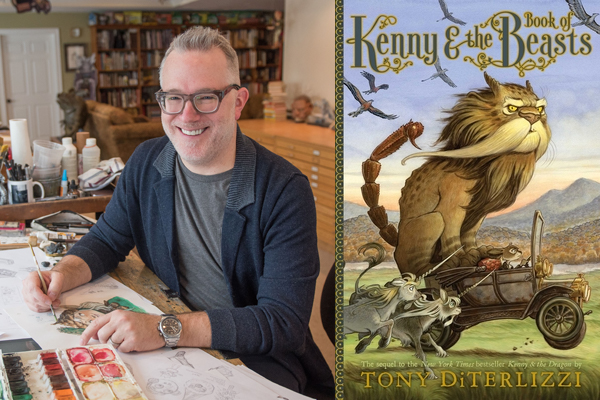 Bestselling author and illustrator Tony DiTerlizzi, creator of THE SPIDERWICK CHRONICLES, joins us for a virtual event hosted by DIARY OF A WIMPY KID author Jeff Kinney! DiTerlizzi will introduce his sequel to KENNY & THE DRAGON, KENNY & THE BOOK OF BEASTS, followed by a drawing demonstration and audience Q & A. You won't want to miss this spellbinding event! When you purchase KENNY & THE BOOK OF BEASTS from us you will receive a signed bookplate, while supplies last. When ordering your book please include that you would like a signed bookplate in the “order comments” section when checking out on our website.

ABOUT THE BOOK:
In this highly anticipated sequel to New York Times bestselling and Caldecott Honor–winning author Tony DiTerlizzi’s Kenny and the Dragon, Kenny must cope with many changes in his life—including the fear that he’s losing his best friend.

What can come between two best friends?

Time has passed since Kenny Rabbit’s last adventure with his best friend, the legendary dragon Grahame, and a lot has changed in the sleepy village of Roundbrook.

For starters, Kenny has a whole litter of baby sisters. His friends are at different schools and Sir George is off adventuring.

At least Kenny still has his very best friend, Grahame. That’s before Dante arrives. Dante is a legendary manticore and an old friend of Grahame’s. Old friends spend a lot of time catching up. And that catching up does not involve Kenny.

But there’s a Witch to defeat, a pal to rescue, and a mysterious book to unlock. And those are quests for best friends, not old friends. Right?

ABOUT THE AUTHOR:
Tony DiTerlizzi is a #1 New York Times bestselling author and illustrator who has been creating books for twenty years. From fanciful picture books, such as Jimmy Zangwow’s Out-of-This-World Moon-Pie Adventure and The Spider and the Fly (a Caldecott Honor Book), to fantastic middle grade novels like Kenny & the Dragon and the WondLa trilogy, Tony imbues each story with his rich imagination. He created The Spiderwick Chronicles with Holly Black, which has sold millions of copies around the world. You can learn more about Tony at DiTerlizzi.com.