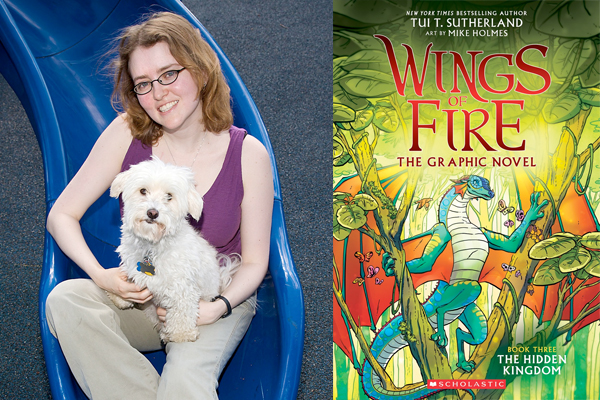 The #1 New York Times bestselling Wings of Fire series soars to new heights in the third graphic novel adaptation, and the queen of dragons herself will be here to answer all your burning questions! Tui will talk about the new book, answer fan questions, and sign books.

Tickets include one (1) copy of THE HIDDEN KINGDOM graphic novel in paperback and admission for two (2). Tickets for general admission seating are SOLD OUT. Tickets for our third floor overflow seating are available below. Overflow attendees will get to watch Tui’s presentation live on a large TV monitor and then come down to meet the author and get their books signed following the presentation.

ABOUT THE BOOK:
The #1 New York Times bestselling Wings of Fire series soars to new heights in the third graphic novel adaptation!

Glory knows that the dragon world is wrong about her being "a lazy RainWing." Maybe she wasn't meant to be one of the dragonets of destiny, but Glory is sharp and her venom is deadly...even if that's still a secret.

So when the dragonets seek shelter in the rain forest, Glory is devastated to find that the treetops are full of RainWings that nap all day and know nothing of the rest of Pyrrhia. Worst of all, they don't realize -- or care -- that RainWings are going missing from their beautiful forest. But Glory and the dragonets are determined to find the missing dragons, even if it drags the peaceful RainWing kingdom where they never wanted to be -- into the middle of the war.

ABOUT THE AUTHOR:
Tui T. Sutherland is the author of the New York Times and USA Today bestselling Wings of Fire series, the Menagerie trilogy, and the Pet Trouble series, as well as a contributing author to the bestselling Spirit Animals and Seekers series (as part of the Erin Hunter team). In 2009, she was a two-day champion on Jeopardy! She lives in Massachusetts with her wonderful husband, two awesome sons, and two very patient dogs. To learn more about Tui's books, visit her online at tuibooks.com.