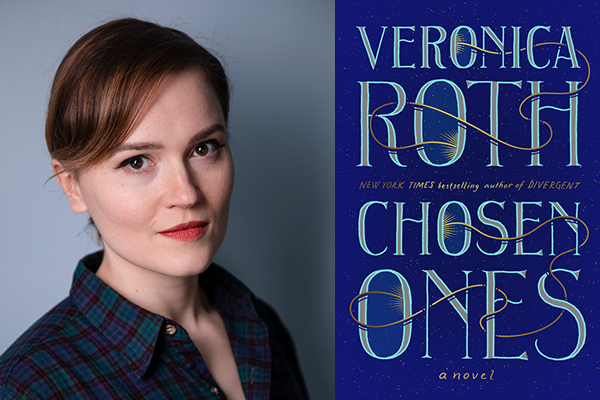 We love seeing our favorite books on screen, but what is that process like for the author? You can find out on April 7th at a virtual event with the bestselling author of the DIVERGENT series Veronica Roth and bestselling author of the GRISHAVERSE Leigh Bardugo! Veronica and Leigh will talk about book-to-film adaptations and their debuts into adult fantasy and sci-fi, including Veronica’s newest book, CHOSEN ONES.

Tune in at twitch.tv/vrothbooks on Tuesday, April 7th at 7pm. When you buy CHOSEN ONES with us, you get a signed book plate! Fill out THIS FORM for a signed or personalized book plate. If you are ordering more than one book, fill out the form again for each book. CHOSEN ONES can be ordered below.

ABOUT THE BOOK:
CHOSEN ONES opens ten years after five ordinary teenagers have saved the world from an impossibly powerful entity wreaking havoc across North America. In the subsequent decade the world went back to normal . . . for everyone but them. Because what happens when you’ve saved the earth from destruction, and become one of the most famous people in the world? Where do you go from there? CHOSEN ONES is the story of what happens next, when this group reunites as adults for a new battle they never dreamed they’d have to fight.  Veronica’s protagonists are, as she writes, “the ones who bore heavy burdens on behalf of people older and wiser than they were….How do they cope with being famous for the same thing that brought them trauma, death, and loss? How do they move on? Can they?” These questions of how to be an adult in the face of pain, and of doing the dirty work for an older generation, are ideas that resonate especially hard in today’s world.

"Roth (The End and Other Beginnings: Stories From the Future, 2019, etc.) made her name by writing bestselling YA action/adventure novels like the Divergent series, so it makes sense that she can so expertly deconstruct those tropes for adult audiences. There’s a lot of magic and action to make for a propulsive plot, but much more impressive are the character studies as Roth takes recognizable and beloved teen-hero types and explores what might happen to them as adults. Roth makes a bold entrance to adult fantasy."
—Kirkus Review (starred)

ABOUT THE AUTHORS:
VERONICA ROTH is the #1 New York Times best-selling author of the Divergent series (Divergent, Insurgent, Allegiant, and Four: A Divergent Collection), the Carve the Mark duology (Carve the Mark, The Fates Divide), and many short stories and essays.

MAX GLADSTONE has been thrown from a horse in Mongolia and nominated for the Nebula, Hugo, John W Campbell, and Lambda Awards. He is the author of EMPRESS OF FOREVER, the Hugo-nominated Craft Sequence, and, with Amal El-Mohtar, THIS IS HOW YOU LOSE THE TIME WAR.