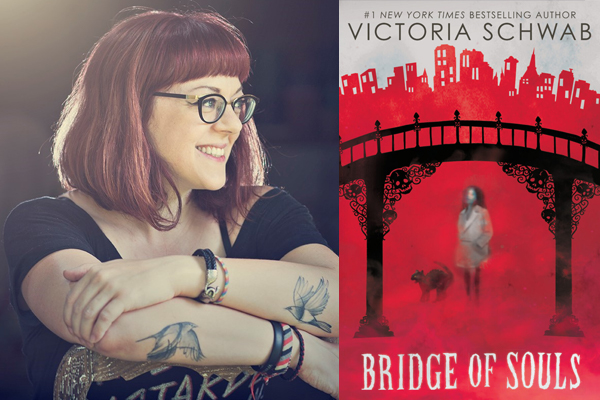 Victoria Schwab, the #1 New York Times bestselling author of over a dozen novels, presents BRIDGE OF SOULS, her third installment in the middle grade CITY OF GHOSTS series. In this virtual event, Victoria will be in conversation with DIARY OF A WIMPY KID author Jeff Kinney. The two will discuss BRIDGE OF SOULS, which finds main character, Cass, and her ghostly best friend, Jacob, in one of the most haunted cities in America, New Orleans. Following the presentation, Victoria will answer audience questions.

Tickets include one copy of BRIDGE OF SOULS, admission to the virtual event, and a signed bookplate from Victoria.

Any additional copies of Victoria's books can be purchased below.

ABOUT THE BOOK:
Victoria ("V. E.") Schwab, the #1 New York Times bestselling author of The Invisible Life of Addie LaRue, invites readers to haunted New Orleans in this third installment of her thrillingly spooky City of Ghosts series!

Where there are ghosts, Cassidy Blake follows . . .

Unless it's the other way around?

Cass thinks she might have this ghost-hunting thing down. After all, she and her ghost best friend, Jacob, have survived two haunted cities while traveling for her parents' TV show.

But nothing can prepare Cass for New Orleans, which wears all of its hauntings on its sleeve. In a city of ghost tours and tombs, raucous music and all kinds of magic, Cass could get lost in all the colorful, grisly local legends. And the city's biggest surprise is a foe Cass never expected to face: a servant of Death itself.

ABOUT THE AUTHOR:
Victoria Schwab is the #1 New York Times bestselling author of more than a dozen novels for readers of all ages, including City of Ghosts and Tunnel of Bones, Everyday Angel: Three Novels, the Shades of Magic series (which has been translated into over 15 languages), This Savage Song, and Our Dark Duet. Victoria can often be found haunting Paris streets and trudging up Scottish hillsides. Usually, she's tucked in the corner of a coffee shop, dreaming up stories. Visit her online at veschwab.com.