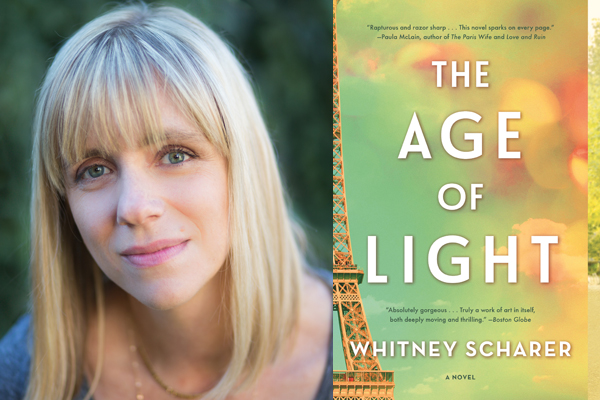 In her stunning debut novel, THE AGE OF LIGHT, Whitney Scharer novelizes the true account of photographer Lee Miller in the alternating timelines of 1930s Paris and the battlefields of WWII. To celebrate the paperback release of THE AGE OF LIGHT, Whitney will talk about her richly-researched novel with James Scott, author of THE KEPT. We'll set the mood with French snacks, both sweet and savory and a special AGE OF LIGHT-themed cocktail, as well as beer and wine, will be available for purchase. A Q&A and a book signing will follow the presentation.

ABOUT THE BOOK:
A captivating debut novel by Whitney Scharer, The Age of Light tells the true story of Vogue model turned renowned photographer Lee Miller, and her search to forge a new identity as an artist after a life spent as a muse. "I'd rather take a photograph than be one," she declares after she arrives in Paris in 1929, where she soon catches the eye of the famous Surrealist Man Ray. Though he wants to use her only as a model, Lee convinces him to take her on as his assistant and teach her everything he knows. As they work together in the darkroom, their personal and professional lives become intimately entwined, changing the course of Lee's life forever.

Lee's journey of self-discovery takes took her from the cabarets of bohemian Paris to the battlefields of war-torn Europe during WWII, from inventing radical new photography techniques to documenting the liberation of the concentration camps as one of the first female war correspondents. Through it all, Lee must grapple with the question of whether it's possible to stay true to herself while also fulfilling her artistic ambition--and what she will have to sacrifice to do so.

Told in alternating timelines of 1930s Paris and the battlefields of WWII, this sensuous, richly researched and imagined debut novel brings to light the life of a fearless, original artist--a woman whose name and art should be known by everyone.

ABOUT THE AUTHOR:
Whitney Scharer earned her MFA in Creative Writing from the University of Washington, and her short fiction has appeared in the Bellevue Literary Review, Cimarron Review, and other journals. She's received an Emerging Artist Award in Literature from the St. Botolph Club Foundation, a Somerville Arts Council Artists grant, and been awarded a residency at the Virginia Center for the Creative Arts. The Age of Light is her first novel.

The Age of Light: A Novel (Paperback)

The Kept: A Novel (Paperback)