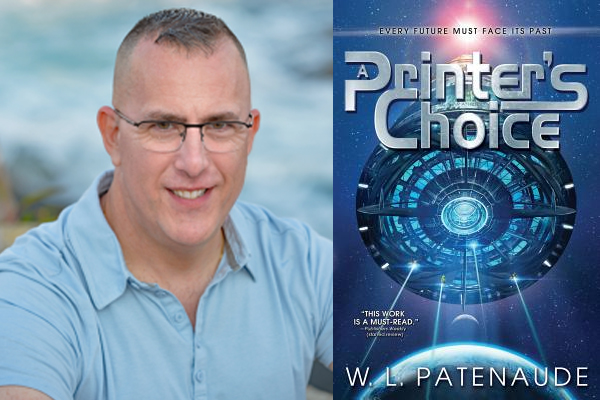 The year is 2088 and outer space is rocked by its first murder! In his debut novel, A PRINTER’S CHOICE, theologian and engineer William Patenaude explores faith, choice, and today’s geopolitical and ecological turmoil in a science-fiction murder-mystery. At the event, William will talk about his book and the process of bringing the different aspects of his eclectic background into his epic debut. A Q&A and book signing will follow.

ABOUT THE BOOK:
In January 2088, life in outer space is rocked with news of its first homicide. The dead man--a young Dominican Priest--had secretly made his way "upside" and lived as a common laborer. His intentions are a mystery and the killer's identity and motive are questions that the best investigators of the new world cannot answer.

With public order threatened, the reputation of the ruling engineers at stake, and criminal elements seizing the opportunity to gain control, authorities seek help from Earth--itself recovering from decades of war and environmental crises. With assistance from the Vatican, they recruit Father John Francis McClellan, a parish priest from Boston and a retired US Marine Corps expert in "high-defs"--the artificially intelligent three-dimensional printers that built the new world.

A Printer's Choice tells a story of faith, the future, and the power of free will. It explores questions about sentience, choice, and the necessity of choosing well. Set in locations on Earth and in the orbits, the story takes place in a future extrapolated from today's geopolitical and ecological turmoil. In this epic debut novel, author W. L. Patenaude illuminates not just the struggles of our world, but also the promises and implications of building a better one, one choice at a time.

ABOUT THE AUTHOR:
Educated in engineering and theology, William Patenaude has been writing and speaking on the intersection of faith and reason for almost two decades. In 2011, he received a master's degree in theology. With this diverse background, Patenaude has reached beyond his environmental regulatory career by serving as a special lecturer in theology at Providence College, providing religious education for local parishes, and writing for national publications, including Catholic World Report. He has also provided analysis for The National Catholic Register, Catholic News Agency, Associated Press, National Geographic, Crux, the Washington Post, and the New York Times. Patenaude is a Knight Commander with the Equestrian Order of the Holy Sepulchre of Jerusalem. When he's not writing, regulating, or teaching, Patenaude exercises, gardens, and spends time pondering the heavens that have inspired his debut novel, A Printer's Choice.