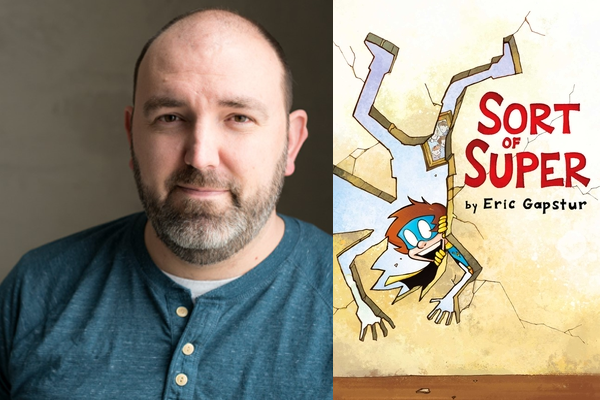 Eric Gapstur, author, illustrator, and DC cartoonist, is celebrating the release of the first book in his middle grade graphic novel series, SORT OF SUPER, that is AWKWARD by Svetlana Chmakova meets HILO by Judd Winick. Fans of superhero and underdog stories will love this new series! Jeff Kinney, author of the DIARY OF A WIMPY KID series and owner of An Unlikely Story, will host this event. Eric and Jeff will have a fun conversation about superheroes and illustration. Save your spot in this free event below.

Eric has kindly signed bookplates for customers who order SORT OF SUPER  from An Unlikely Story, while supplies last.

ABOUT THE BOOK:
Awkward by Svetlana Chmakova meets the HiLo series in this first book in a funny, lighthearted new middle grade graphic novel series about a boy struggling with new superpowers—and middle school.

Eleven-year-old Wyatt Flynn had something amazing happen to him: he got superpowers! Good ones too, like super-flight, super-strength, and super-speed. The only problem? Wyatt got his superpowers totally by mistake, and his dad—who’s been overprotective since Wyatt’s mom disappeared—thinks he’s too young for them and worries what would happen if everyone found out. So he makes Wyatt hide his powers.

Keeping such a huge secret from his best friends Beto and Nara is bad enough, but not being able to use his new abilities to defend them from the biggest bully at school makes Wyatt feel useless and frustrated. But his little sister thinks the good his powers could do is more important than following Dad’s rules. Slowly, the two of them become a dynamic crime-fighting duo right under their dad’s nose.

Lying to his dad isn’t much easier than lying to his friends. But Wyatt might be able to make a real difference in the community…and maybe even find Mom. That makes it all worth it—right?

ABOUT THE AUTHOR:
Eric Gapstur is an author, illustrator, and cartoonist living in eastern Iowa with his wife and two sons. His work can be seen in DC and Image comics, among others. Sort of Super is his debut graphic novel.