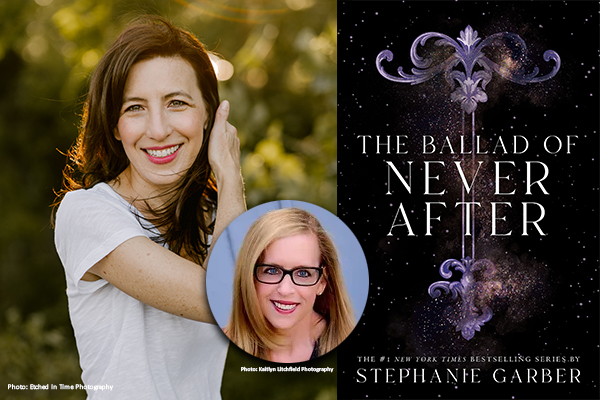 Join author Stephanie Garber in discussing BALLAD OF NEVER AFTER, the fiercely-anticipated sequel to her #1 New York Times bestseller ONCE UPON A BROKEN HEART. With this new installment, we join Evangeline Fox and the Prince of Hearts on a new journey of magic, mystery, and heartbreak. Garber’s rich world-building and loveable characters shine through in this unputdownable sequel. Stephanie will be in conversation with bestselling author Karen McManus. Following their discussion will be an audience Q & A and book signing.

ABOUT THE BOOK:
Stephanie Garber's The Ballad of Never After is the fiercely-anticipated sequel to the #1 New York Times bestseller Once Upon a Broken Heart, starring Evangeline Fox and the Prince of Hearts on a new journey of magic, mystery, and heartbreak

Not every love is meant to be.

After Jacks, the Prince of Hearts, betrays her, Evangeline Fox swears she'll never trust him again. Now that she’s discovered her own magic, Evangeline believes she can use it to restore the chance at happily ever after that Jacks stole away.

But when a new terrifying curse is revealed, Evangeline finds herself entering into a tenuous partnership with the Prince of Hearts again. Only this time, the rules have changed. Jacks isn’t the only force Evangeline needs to be wary of. In fact, he might be the only one she can trust, despite her desire to despise him.

Instead of a love spell wreaking havoc on Evangeline’s life, a murderous spell has been cast. To break it, Evangeline and Jacks will have to do battle with old friends, new foes, and a magic that plays with heads and hearts. Evangeline has always trusted her heart, but this time she’s not sure she can. . . .

ABOUT THE AUTHORS:
Stephanie Garber is the #1 New York Times and internationally bestselling author of Once Upon a Broken Heart, The Ballad of Never After, and the Caraval trilogy. Her books have been translated into thirty languages.

Karen M. McManus earned her BA in English from the College of the Holy Cross and her MA in journalism from Northeastern University. She is the #1 New York Times bestselling author of One of Us Is Lying, Two Can Keep a Secret, One of Us Is Next, and The Cousins. Her work has been published in more than 40 languages. To learn more about Karen and her books, visit karenmcmanus.com, or follow @writerkmc on Twitter and Instagram.

Once Upon a Broken Heart (Hardcover)