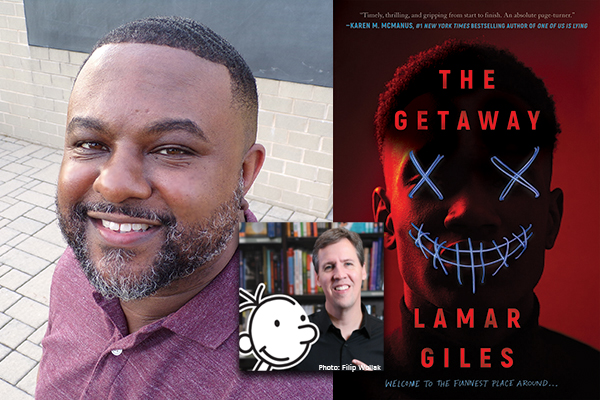 Join us in welcoming two-time Edgar Award finalist Lamar Giles to celebrate the release of his newest YA novel, THE GETAWAY, a compelling, thought-provoking dystopian thriller perfect for fans of Tiffany D. Jackson, Joe Hill, and R.L. Stine. In THE GETAWAY, we're introduced to the (seemingly) utopian world of Karloff Country resort and theme park. However, something sinister is going on beneath the surface, and we follow our protagonist Jay as he and his friends attempt to uncover the truth lurking in the darkness. This thrilling book had us hooked from the first page, and we’re so excited to have Lamar share it with us! Lamar will be in conversation with Jeff Kinney, bestselling author of the Diary of a Wimpy Kid series and owner of An Unlikely Story. You won't want to miss out on what's sure to be an unforgettable event! Following their discussion, Lamar will answer audience questions and sign books.

ABOUT THE BOOK:
“Timely, thrilling, and gripping from start to finish. An absolute page-turner.” --Karen M. McManus, #1 New York Times bestselling author of One of Us Is Lying

Jay is living his best life at Karloff Country, one of the world’s most famous resorts. He’s got his family, his crew, and an incredible after-school job at the property’s main theme park. Life isn’t so great for the rest of the world, but when people come here to vacation, it’s to get away from all that.

As things outside get worse, trouble starts seeping into Karloff. First, Jay’s friend Connie and her family disappear in the middle of the night and no one will talk about it. Then the richest and most powerful families start arriving, only... they aren’t leaving. Unknown to the employees, the resort has been selling shares in an end-of-the-world oasis. The best of the best at the end of days. And in order to deliver the top-notch customer service the wealthy clientele paid for, the employees will be at their total beck and call.

Yet Karloff Country didn’t count on Jay and his crew--and just how far they’ll go to find out the truth and save themselves. But what’s more dangerous: the monster you know in your home or the unknown nightmare outside the walls?

ABOUT THE AUTHOR:
Lamar Giles is the author of The Getaway; Spin, which was a New York Times Editors’ Pick and a YALSA Quick Pick; Overturned, which was also a YALSA Quick Pick; Not So Pure and Simple; Fake ID, which was an Edgar Award finalist; and Endangered, which was also an Edgar Award finalist. He the editor of the anthology, Fresh Ink, and has contributed to many other anthologies as well. Lamar is a founding member of We Need Diverse Books. He resides in Virginia with his family.