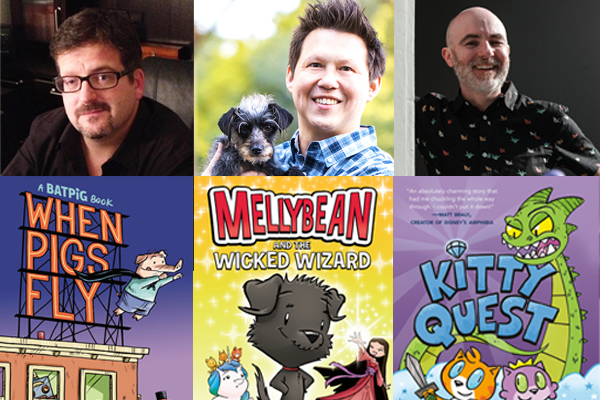 We're thrilled to announce that at 6pm EST on Monday, November 29th, December 13th, and December 20th we are hosting special graphic novel drawing series with different creators each week! Each week during this online series, three artists will take our virtual stage to discuss their graphics novels and run a drawing demonstration. This series is perfect for middle grade readers and aspiring graphic novelists.

On Monday, November 29th, join artists Rob Harrell, creator of BATPIG: WHEN PIGS FLY, Mike White, creator of MELLYBEAN AND THE WICKED WIZARD, and Phil Corbett, author and illustrator of KITTY QUEST! Save your spot in the free event below.

Rob Harrell created the Life of Zarf series, the graphic novel Monster on the Hill, and also writes and draws the long-running daily comic strip Adam@Home, which appears in more than 140 papers worldwide. He created and drew the internationally syndicated comic strip Big Top until 2007. He lives with his wife in Indiana

Mike White was born and raised in Toronto. He worked for five years in children's television animation before moving to San Francisco in 2008 to make mobile games and apps. In 2018, after getting nachos for lunch, Mike and his girlfriend, Carol, were walking around an outdoor mall and met a cute little puppy at a pop-up adoption event. After much consideration they adopted the puppy and named her Melody, and her delightful and infectious personality became the inspiration for Mellybean. You can follow all things Mellybean on Twitter @Mellybeanpup and by visiting Mellypup.com.

Phil Corbett is a professional storyteller. He was the last person to write and illustrate the adventures of one of the oldest comic characters in the world, Korky the Cat, from the UK comic magazine The Dandy. He's previously worked in the gaming and toy industry with clients such as Cartoon Network, Disney, Nickelodeon, Nintendo, and PlayStation. Kitty Quest is his debut graphic novel. You can see more of his work at www.philcorbett.com.

Mellybean and the Wicked Wizard (Paperback)

Mellybean and the Giant Monster (Paperback)