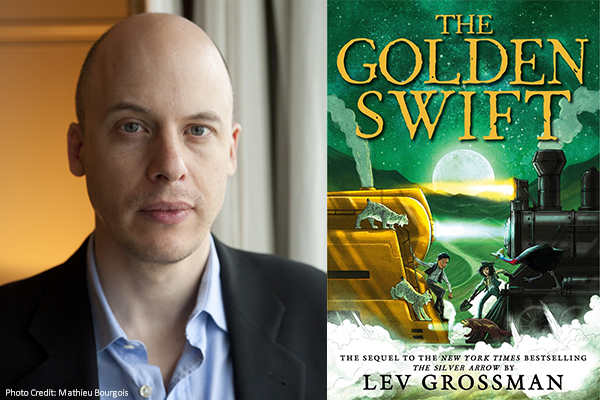 THE SILVER ARROW is a thrilling fantasy adventure that's a favorite of ours along with being among the New York Times Best Children's Books of 2020, and we're delighted to welcome Lev Grossman to introduce the sequel, THE GOLDEN SWIFT! Lev Grossman is best known for his #1 New York Times bestselling Magicians trilogy—The Magicians, The Magician King, and The Magician’s Land—which has been published in thirty countries and adapted as a TV show. In THE SILVER ARROW, Kate and her brother Tom became the conductors of the steam-powered, animal-saving Great Secret Intercontinental Railway. THE GOLDEN SWIFT continues Kate and Tom's adventures, taking them from the Scottish Highlands to the Australian outback to the bottom of the Bering Sea and introduces a new train called...you guessed it...The Golden Swift. Lev will talk all about his fantastical middle-grade novels, answer audience questions, and sign books.

ABOUT THE BOOK:
The thrilling sequel to #1 NYT bestselling author Lev Grossman’s The Silver Arrow, in which Kate and Tom confront the limits of what even magic can do.

A lot has changed for Kate in a year. She and Tom are now full-fledged conductors of the steam-powered, animal-saving Great Secret Intercontinental Railway. Life is good!

Or good-ish, anyway. Her uncle Herbert has gone missing, and the worsening climate means that there are more and more animals that need help all the time. How many times does Kate have to save the world before it stays saved?

And her real life isn’t exactly perfect either. She flunked her audition for the junior high musical and got stuck in the chorus, while her archenemy Jag got a lead.

So, out of desperation, Kate breaks the rules and takes the Silver Arrow out on an unsanctioned mission, to find Uncle Herbert and bring back balance to the world. But she quickly discovers she’s not the only one on the Great Secret Intercontinental Railway. There’s a mysterious train called the Golden Swift out there too, with an agenda of its own. Is it an ally? A rival? An enemy? A bit of all three?

The question will turn Kate’s world upside down, take her from the Scottish Highlands to the Australian outback to the bottom of the Bering Sea, and lead her straight on a collision course with the mysterious masters of the Great Secret Intercontinental Railway itself. Because when you're a human being fighting to save nature, are you the hero or are you the villain? There are no simple answers.

ABOUT THE AUTHOR:
Lev Grossman is the author of five novels including The Silver Arrow, and the #1 New York Times bestselling Magicians trilogy, which has been published in thirty countries. A TV adaptation of the trilogy is now in its fifth season as the top-rated show on Syfy. Grossman is also an award-winning journalist who spent fifteen years as the book critic and lead technology writer at Time magazine, where he published more than twenty cover stories. In addition, he has written for the New York Times, the Wall Street Journal, Wired, the Believer, the Village Voice, NPR, Salon, Slate, and Buzzfeed, among many others. He lives in New York City with his wife and three children.