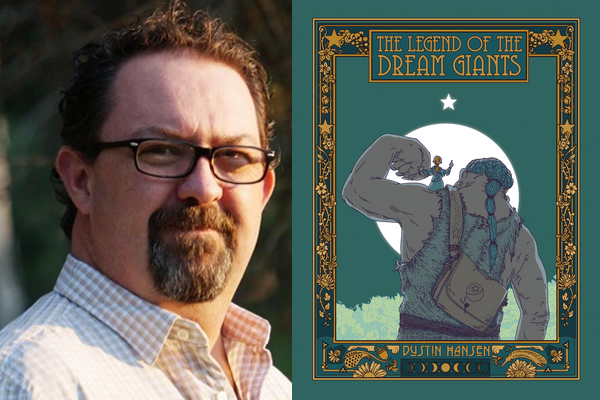 International award-winning video game developer and author Dustin Hansen joins us in-person to share his new middle grade novel THE LEGEND OF THE DREAM GIANTS, about an orphaned giant named Berg is in search of just one person he can call a friend. It's a tender and unique story of loss, longing, adventure, being yourself, and finding the true meaning of friendship. Jeff Kinney, author of the DIARY OF A WIMPY KID series will interview Dustin during this event. Following the interview, will be an audience Q & A and signing. Register to attend this free event below.

At this time, masks are required to be worn at in-person events, no exceptions. If you cannot make the event but would like a signed book from Dustin, order it below by May 8th and include the name of the person you would like the book inscribed to in the "order comments" when checking out.

ABOUT THE BOOK:
An orphaned giant named Berg is in search of just one person he can call friend.

When he was very young, Berg's mother hid him in a cave and led an angry mob of villagers away, sacrificing her own life to protect her son. In all the years since, Berg has lived alone, the only reminders of his family are his mother's satchel and his recurring dreams of a white bear who shares a magical sand from a fallen star. When the white bear touches Berg with the star-blue sand, he feels safe and happy in his dreams. Sometimes, when he feels lonely, he will risk entering a village to trade a smooth river rock or a feather for food. He's really searching for kindness, companionship, and, maybe one day, someone who will want to get to know him and be his friend. But with every attempt he makes, people only see his massive size and cruelly chase him away, thinking he is nhold--a giant and a monster. Whoever this nhold is, Berg also fears him and hopes they never meet.

In his travels, Berg comes upon a new town, a city made of iron where blacksmiths construct all kinds of ironworks from gates to sculptures to chains and weapons. Berg meets a little girl, Anya, who doesn't run and scream in fear like everyone else does. To his amazement and delight, Anya knows about the dream-sand and says she wants to be his friend.

The mayor convinces the villagers of the benefit of having a giant around who can protect their city from the dangers he says nhold has in store for them. Anya has learned about the dream-sand from secretly watching nhold use it to trade for food and trinkets, and she suspects the mayor is planning something different than what he says. Fearing the city isn't safe for Berg, she warns her giant friend to flee. When a secret plot is revealed to capture Berg, the young giant has to figure out where he can place his trust.

The story follows Berg on his journey and is told through text and graphic novel-style illustrations of beautiful dream sequences that reveal Berg's hopes and memories. Berg's mother appears to him in his dreams as a white bear, patient, nurturing and protective, and he sees himself as a little bear cub. Berg is often unsure what exactly the dreams mean, but sometimes they describe things which are about to happen or give him answers to problems he is facing.

This tender and unique story-within-a-story is a riveting tale of loss, longing, adventure, being yourself, and finding the true meaning of friendship.

ABOUT THE AUTHOR:
Dustin Hansen is an international award-winning video game developer and has been creating story and art for the children's entertainment world for decades. He has also worked in theme parks, and as the Innovation Director for Hasbro Inc. He is the author of the Microsaurs series, a graphic novel My Video Game Ate My Homework, and a nonfiction bestseller, Game On! Video Game History from Pong and Pac-Man to Mario, Minecraft and More. As a dyslexic writer, Dustin's drive to combine visuals with the written word has been a thread throughout his career.

The Legend of the Dream Giants (Hardcover)

The Greatest Stories Ever Played: Video Games and the Evolution of Storytelling (Game On #2) (Hardcover)

Game On!: Video Game History from Pong and Pac-Man to Mario, Minecraft, and More (Paperback)