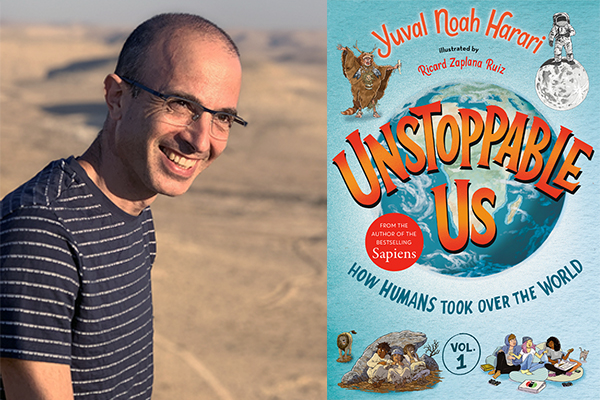 World-renowned historian and philosopher Yuval Noah Harari joins us to talk about his new book, UNSTOPPABLE US, Volume 1, his first children’s book, with Jeff Kinney. In UNSTOPPABLE US, Professor Harari takes a look at how humans, originally weak and slow, took over the world. We have a lot of power, so much so that the fate of all the other animals depend on us. To understand the power humans possess, and to learn how to use it in good ways, we have to learn how we got that power in the first place. Professor Harari relates our history like a good detective story, with humor and an unbelievable ability to break complicated ideas down in a way kids (and adults) can understand.

ABOUT THE BOOK:
NEW YORK TIMES BESTSELLER • From world-renowned historian and philosopher Yuval Noah Harari, the bestselling author of Sapiens, comes an exciting, illustrated book for middle school readers that looks at the early history of humankind.

Even though we’ll never outrun a hungry lion or outswim an angry shark, humans are pretty impressive—and we’re the most dominant species on the planet. So how exactly did we become “unstoppable”?

The answer to that is one of the strangest tales you’ll ever hear. And it’s a true story.

From learning to make fire and using the stars as guides to cooking meals in microwaves and landing on the moon, prepare to uncover the secrets and superpowers of how we evolved from our first appearances millions of years ago.

Acclaimed author Yuval Noah Harari has expertly crafted an extraordinary story of how humans learned to not only survive but also thrive on Earth, complete with maps, a timeline, and full-color illustrations that bring his dynamic, unputdownable writing to life.

ABOUT THE AUTHOR:
Prof. Yuval Noah Harari is a historian, a philosopher, and the bestselling author of Sapiens: A Brief History of Humankind, Homo Deus: A Brief History of Tomorrow, 21 Lessons for the 21st Century, and Sapiens: A Graphic History. His books have sold over 35 million copies in 65 languages, and he is considered one of the world’s most influential public intellectuals today. ynharari.com / Twitter @harari_yuval / Instagram: @yuval_noah_harari

Unstoppable Us, Volume 1: How Humans Took Over the World (Hardcover)