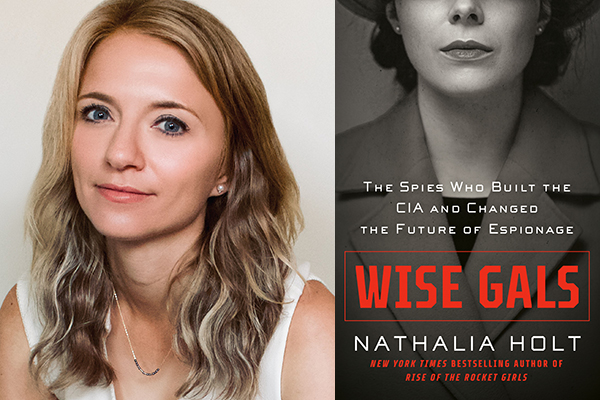 New York Times bestselling author Nathalia Holt will join us to discuss her new book, WISE GALS: The Spies Who Built the CIA and Changed the Future of Espionage. WISE GALS tells the previously unheard story of a group of female spies who were integral to the CIA's early formation, helping to shape the idea of espionage in a post-WWII world. Holt's diligent research into the lives of these trailblazing women showcases their legacies and perseverance against injustices and workplace inequality.

During World War II and the tense post-war period of the ‘50s and ‘60s, five women employed by the U. S. government moved around the globe like shadows. No one except their immediate superiors knew the exact nature of their work; even their families had no clue. But though they appeared to live ordinary lives as secretaries and clerks, their jobs were far more complex and exponentially more dangerous than anyone could imagine. These women were American spies at a critical time in history, and each played a vital role on the international stage. For love of country and a sense of purpose, they took entry-level jobs with the government just as fledgling national security efforts were taking off. This small cadre of smart women would become founding members of the Central Intelligence Agency (CIA), where they developed new tools for cutting-edge espionage, played a crucial role in averting nuclear war, and blazed new paths for women’s equality in the field.

The inherent secrecy of the CIA’s activity, however, buried evidence of their brilliance and bravery in classified documents for decades—until now. Bestselling author Nathalia Holt shines a long-overdue spotlight on these extraordinary women in WISE GALS: The Spies Who Built the CIA and Changed the Future of Espionage, a stunning true account that honors their legacy, heroism, and perseverance in the face of institutional inequality. Perfectly timed for the 75th anniversary of the founding of the CIA in September 2022, WISE GALS shares the inspiring yet often treacherous journeys of Eloise Page, Jane Burrell, Adelaide (Addy) Hawkins, Mary Hutchison, and Elizabeth (Liz) Sudmeier: five accomplished women who brought their wide variety of talents to a brand new field. Along with official government records, they left behind a treasure trove of material—diaries, letters, interviews, reports, memos, scrapbooks, and photographs—that Holt unearths to bring their untold stories to life.

Nathalia Holt is the New York Times-bestselling author of Rise of the Rocket Girls, The Queens of Animation, and Cured. In addition to spotlighting fascinating untold stories, she has delivered TED talks and published her work in numerous publications including The New York Times, The Los Angeles Times, The Atlantic, Slate, Popular Science, and Time. She lives in California with her family.

Wise Gals: The Spies Who Built the CIA and Changed the Future of Espionage (Hardcover)

Rise of the Rocket Girls: The Women Who Propelled Us, from Missiles to the Moon to Mars (Paperback)

The Queens of Animation: The Untold Story of the Women Who Transformed the World of Disney and Made Cinematic History (Paperback)