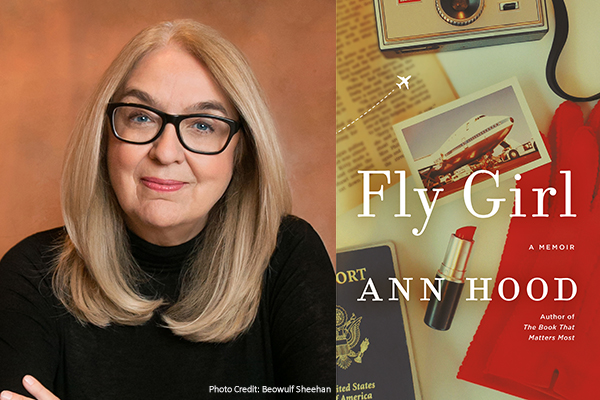 Ann Hood returns to An Unlikely Story to introduce her delightful memoir, FLY GIRL, about her life as a flight attendant. Packed with funny, moving, and shocking stories of life as a flight attendant, FLY GIRL captures the nostalgia and magic of air travel at its height, and the thrill that remains with every takeoff. Beverage service including beer and wine will be available for purchase, along with copies of Ann's books. The first 25 people to order FLY GIRL from us will receive an exclusive FLY GIRL eye mask. Register to attend this free event below.

If you cannot make the event but would like a signed book from Ann, order it below by June 2nd and include the name of the person you would like the book inscribed to in the "order comments" when checking out.

ABOUT THE BOOK:
An entertaining and fascinating memoir of “gifted storyteller” (People) Ann Hood’s adventurous years as a TWA flight attendant.

In 1978, in the tailwind of the golden age of air travel, flight attendants were the epitome of glamor and sophistication. Fresh out of college and hungry to experience the world—and maybe, one day, write about it—Ann Hood joined their ranks. After a grueling job search, Hood survived TWA’s rigorous Breech Training Academy and learned to evacuate seven kinds of aircraft, deliver a baby, mix proper cocktails, administer oxygen, and stay calm no matter what the situation.

In the air, Hood found both the adventure she’d dreamt of and the unexpected realities of life on the job. She carved chateaubriand in the first-class cabin and dined in front of the pyramids in Cairo, fended off passengers’ advances and found romance on layovers in London and Lisbon, and walked more than a million miles in high heels. She flew through the start of deregulation, an oil crisis, massive furloughs, and a labor strike.

As the airline industry changed around her, Hood began to write—even drafting snatches of her first novel from the jump-seat. She reveals how the job empowered her, despite its roots in sexist standards. Packed with funny, moving, and shocking stories of life as a flight attendant, Fly Girl captures the nostalgia and magic of air travel at its height, and the thrill that remains with every takeoff.

ABOUT THE AUTHOR:
Ann Hood is the author of the best-selling novels The Book That Matters Most, The Obituary Writer, and The Knitting Circle, and the memoir Comfort: A Journey Through Grief. Her most recent books are the memoirs Fly Girl A Memoir and Kitchen Yarns: Notes on Life, Love, and Food. She lives in Providence, Rhode Island, and New York City.

The Book That Matters Most: A Novel (Paperback)

The Obituary Writer: A Novel (Paperback)