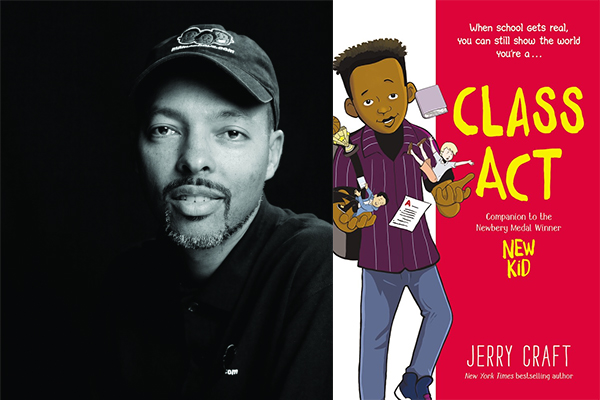 Jerry Craft and his two sons were our very first event when we opened five years ago. Since then, we've welcomed him back most recently for NEW KID, and were delighted when he won the Newbery Award. We are so happy to welcome Jerry Craft back for a virtual event to celebrate his new graphic novel, CLASS ACT, a companion to his Newbery award-winning NEW KID. Jerry will be in conversation with Jeff Kinney, owner of An Unlikely Story and author of the bestselling Diary of a Wimpy Kid series. Jerry and Jeff will discuss CLASS ACT, conduct some drawing demonstrations, and answer audience questions. You won't want to miss this one-of-a-kind event!

ABOUT THE BOOK:
Kirkus Prize winner Jerry Craft follows up the critically acclaimed and Newbery award-winning New Kid, with this poignant and funny full-color companion graphic novel about Jordan’s friend Drew, who has his own struggles at Riverdale Academy Day School.

Eighth grader Drew Ellis is no stranger to the saying, “You have to work twice as hard to be just as good.” His grandmother has told him that his entire life. But lately he’s been thinking: Even if he works ten times as hard, he may never get the same opportunities that his privileged classmates at the prestigious Riverdale Academy Day School take for granted. Then, after a visit to his friend Liam’s house, Drew realizes that Liam is one of those privileged kids. He wants to pretend like everything is okay, but even his best friend, Jordan, can tell that something is up.

As the pressures build, and he starts to feel more isolated than ever, will Drew find a way to bridge the divide so he and his friends can truly accept each other? And more importantly, will he finally be able to accept himself?

ABOUT THE AUTHOR:
Jerry Craft is a New York Times bestselling author-illustrator who has worked on numerous books for young readers, including the Newbery medal-winning graphic novel New Kid. Jerry is the creator of Mama’s Boyz, an award-winning syndicated comic strip. He has won five African American Literary Awards and is a cofounder of the Schomburg Center’s Annual Black Comic Book Festival. He received his BFA from the School of Visual Arts and now lives in Connecticut. Visit him online at www.jerrycraft.com.