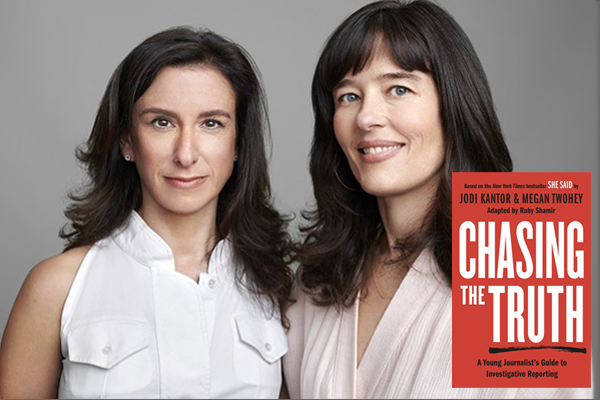 Join Pulitzer Prize winning reporters Jodi Kantor and Megan Twohey as they discuss their new young readers adaptation of their New York Times bestseller SHE SAID with Michael Barbaro,  host of The New York Times podcast, The Daily. In CHASING THE TRUTH, soon to be a major motion picture, Jodi Kantor and Megan Twohey share their thoughts from their early days writing their first stories to their time as award-winning investigative journalists, offering tips and advice along the way. The book will inspire a new generation of young journalists! Save your spot in the free event below.

ABOUT THE BOOK:
The perfect book for all student journalists, this young readers adaptation of the New York Times bestselling She Said by  Pulitzer Prize winning reporters' Jodi Kantor and Megan Twohey will inspire a new generation of young journalists.

Soon to be a major motion picture!

Do you want to know how to bring secrets to light?
How journalists can hold the powerful to account?
And how to write stories that can make a difference?

In Chasing the Truth, award-winning journalists Jodi Kantor and Megan Twohey share their thoughts from their early days writing their first stories to their time as award-winning investigative journalists, offering tips and advice along the way. Adapted from their New York Times bestselling book She Said, Chasing the Truth not only tells the story of the culture-shifting Harvey Weinstein investigation, but it also shares their best reporting practices with readers. This is the perfect book for aspiring journalists or anyone devoted to uncovering the truth.

Praise for the New York Times bestseller She Said:

“Exhilarating…Kantor and Twohey have crafted their news dispatches into a seamless and suspenseful account of their reportorial journey.”
— Susan Faludi, The New York Times

“An instant classic of investigative journalism...‘All the President’s Men’ for the Me Too era.”
— Carlos Lozada, The Washington Post

ABOUT THE AUTHORS:
Jodi Kantor and Megan Twohey are investigative reporters at the New York Times. Jodi has focused on the workplace in her reporting, and particularly the treatment of women, covered two presidential campaigns, and is the author of The Obamas. Megan has focused much of her attention on the treatment of women and children, and, in 2014, as a reporter with Reuters News, was a finalist for the Pulitzer Prize for Investigative Reporting. Jodi and Megan shared numerous honors for breaking the Harvey Weinstein story, including a George Polk Award, and, along with colleagues, the Pulitzer Prize for Public Service. They both live in Brooklyn, NY with their families. You can visit Jodi Kantor and Megan Twohey online at SheSaidTheBook.com

She Said: Breaking the Sexual Harassment Story That Helped Ignite a Movement (Paperback)