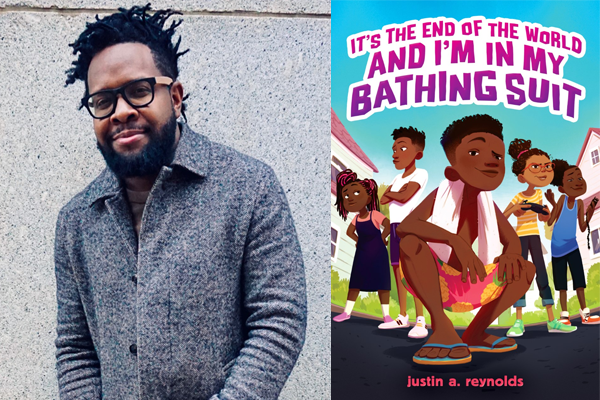 What happens when five unsupervised kids face the apocalypse under outrageously silly circumstances? Find out when author Justin A. Reynolds joins us in-person to share his new middle grade novel, IT’S THE END OF THE WORLD AND I’M IN MY BATHING SUIT. During the event, Justin will discuss his book with DIARY OF A WIMPY KID author Jeff Kinney, answer audience questions, and sign books. Register to attend this free event below.

If you cannot make the event but would still like a personalized copy of Justin's book, please order them below by April 9th, and include the name of the person you'd like the book inscribed to in the "order comments" when checking out.

ABOUT THE BOOK:
A hilarious new middle-grade from Justin A. Reynolds that asks: What happens when five unsupervised kids face the apocalypse under outrageously silly circumstances?

Twelve-year-old Eddie Gordon Holloway has concocted his most genius plan ever to avoid chores... especially the dreaded L-A-U-N-D-R-Y. If he can wear all the clothes he owns, he'll only have to do the laundry once during his school break.

On the day of the highly anticipated Beach Bash, Eddie's monstrous pile of dirty laundry is found by his mom. And Eddie's day has just taken a turn for the worst. Now he's stuck at home by himself, missing the bash, and doing his whole pile of laundry. But mid-cycle, the power goes out!

With his first load of laundry wet and the rest of his stuff still filthy, he sets out to explore the seemingly empty neighborhood in his glow-in-the-dark swim trunks, flip-flops, and a beach towel. He soon meets up with other neighborhood kids: newcomer Xavier (who was mid-haircut and has half his head shaved), Eddie's former friend Sonia (who has spent her entire break trying to beat a video game and was mid-battle with the final boss), and siblings Trey and Sage (who are dealing with major sibling drama).

As they group up to cover more ground and find out what happened, they realize that their families aren't coming back anytime soon. And as night falls, the crew realizes that they aren't just the only people left in the neighborhood, they might be the only people left... anywhere.

ABOUT THE AUTHOR:
Justin A. Reynolds has always wanted to be a writer. Opposite of Always, his debut novel, was an Indies Introduce selection, a School Library Journal Best Book, has been translated in 17 languages, and is being developed for film with Paramount Players. He hangs out in northeast Ohio with his family and likes it, and is probably somewhere, right now, dancing terribly. His second novel, Early Departures, published September 2020. You can find him at justinareynolds.com.

Opposite of Always (Paperback)