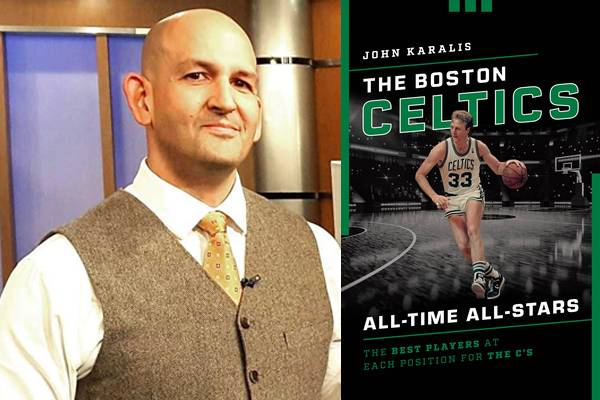 It's a slam dunk for Celtics fans! Join us in-person as professional basketball player and author John Karalis takes our stage to present his new book, THE BOSTON CELTICS ALL-TIME ALL-STARS. Learn all there is to know about the Celtics as John discusses the men who played for and coached the most successful franchise in NBA history. At the event, John will answer audience questions and personalize copies of his books. Register to attend the free event below.

ABOUT THE BOOK:
Let's say you're the coach of one of the NBA teams with the most championship banners hanging from its rafters, with every current and former player available on your bench. Game 7 of the Finals is approaching and it's time to put your team on the floor. Who's your starting center? Bill Russell, Robert Parrish, or Dave Cowens? Who's starting at guard? Bob Cousy, Jo Jo White, Tiny Archibald, Dennis Johnson, or Kyrie Irving? At power forward, are you playing Kevin McHale or Jayson Tatum? Is Larry Bird your small forward or John Havlicek? Combining statistical analysis, common sense, and a host of intangibles, long-time Celtics writer John Karalis constructs an all-time All-Star Celtics line-up for the ages. Agree with his choices or not, you'll learn all there is to know about the men who played for and coached the most successful franchise in NBA history.

ABOUT THE AUTHOR:
John Karalis has covered the Boston Celtics since 2006. He is a former college and professional basketball player who now covers the Celtics for MassLive.com. He lives in Chelsea, Massachusetts.

The Boston Celtics All-Time All-Stars: The Best Players at Each Position for the C's (Paperback)