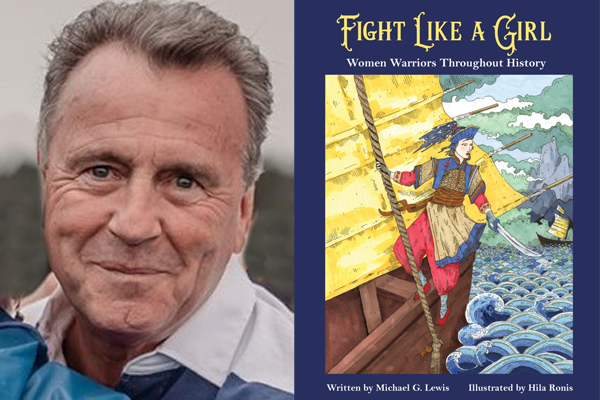 Local author Michael Lewis is celebrating the release of his new non-fiction middle grade book FIGHT LIKE A GIRL in this in-person event, perfect for Women's History Month! The book is a compilation of 25 of the toughest female warriors in history and beautifully illustrated by Hila Ronis. Women have been successfully fighting in combat roles since the beginning of time. In Michael’s research, he discovered women warriors in nearly every century, country, and culture. “Fight Like a Girl is inspiring nonfiction reading for middle graders who are interested in histories and biographical sketches of women who have participated in combat over the years" (Midwest Book Review). Join Michael while he discusses his book, answers audience questions, and signs copies. Register to attend this free event below.

At this time, face masks are required to be worn at in-person events, no exceptions. If you cannot make the event but would like a signed copy of FIGHT LIKE A GIRL, please order it below by March 23rd and include the name of the person you would like your book inscribed to in the "order comments" when checking out.

ABOUT THE BOOK:
Women have been successfully fighting in combat roles since the beginning of time. During Michael G. Lewis’s research, he discovered women warriors in nearly every century, country, and culture. Their differences are many—some were queens, some peasants, some fought for country, others for religion, while others were motivated by blind loyalty, bloodlust, fame, revenge, and even plain old fashioned greed. Yes, their differences are many, but they are more defined by striking similarities—all were smart, stubborn, almost supernaturally brave, and extraordinary. Their stories are inspiring but also chilling. Their exploits tragic, triumphant, awe inspiring, and even humorous. But their stories are unknown. These women warriors—these “Band of Sisters,” as it were—had far reaching effects on the entire world, and their stories deserve to be told.

Boston Globe: “In lively prose, and beautifully illustrated by Hila Ronis, Lewis shows the courage, resourcefulness, and leadership of these remarkable women.”

Midwest Book Review: “Fight Like a Girl is inspiring nonfiction reading and a fine survey of relatively unknown women whose efforts changed their world. It deserves to be in any middle-grade collection seeking to put the roles and achievements of women in their proper place in history.

ABOUT THE AUTHOR:
Following the success of his 4 children’s picture books (Cap’n McNasty’s Pirate Guide, The Great Pirate Christmas Battle, Battle For The Knotty List, and The Great Thanksgiving Food Fight), Mike is excited for the release of Fight Like A Girl, his foray into Middle-Grade historical non-fiction.

Mike grew up in Dedham, MA, and attended Bishop’s University in Quebec, as well as the University of Massachusetts in Amherst. Lewis was playwright-in-residence at the Los Feliz Playhouse in Los Angeles and had a number of works produced and favorably reviewed by the Los Angeles Times, the LA Weekly, The Boston Globe, and The Washington Times, among others. He also wrote, produced, and acted in Getting Personal, an independent feature film that has aired on Showtime, Cinemax, and the Lifetime Channel. His comedic short, The Policy, was a contender in a # of film festival competitions throughout the country, and he worked – albeit, far too infrequently – as an actor on television; most notably with Art Carney and Audrey Meadows of “The Honeymooners” fame.

Mike has hosted and/or participated in over 150 author events, panels, and book readings at schools, libraries, hospitals, book stores, and charitable organizations such as Horizon’s For Homeless Children, The Boys & Girls Clubs, Boston Children’s Hospital, The Girl Scouts, and many others.

When not moonlighting as a children’s book author, Mike has enjoyed a wonderful career as a financial advisor for Northwestern Mutual Wealth Management, helping clients manage risk, protect assets, and pay less in taxes. He resides in the Boston-area with his beautiful wife and four awesome sons.

Fight Like a Girl: Women Warriors Throughout History (Paperback)