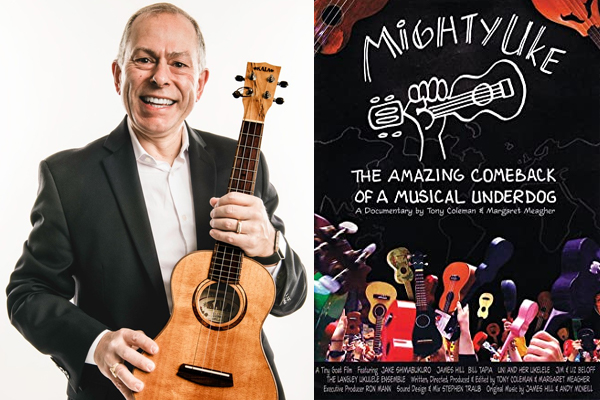 Meet Peter Luongo, one of the worlds most experienced ukulele teachers! Peter is known as the founder and director of the internationally renowned Langley Ukulele Ensemble and was featured prominently in the award-winning documentary film, “The Mighty Uke”. At this event, there will be a screening of "The Mighty Uke", followed by an audience Q & A with Peter. Beer, wine, soft drinks, and snacks will be available for purchase at this event. Please bring a valid ID if you plan to drink. Admission is $6.24 per person. Register below.

ABOUT THE DOCUMENTARY byTony Coleman & Margaret Meagher:
Think of a ukulele and you probably imagine grass skirts, slide guitar and kitchy lyrics, but far from being just a Hawaiian novelty instrument, the uke has a rich history and has profoundly affected music around the world.

Originally brought to Hawaii by Portuguese immigrants, the tiny instrument first captured the musical imaginations of the Hawaiian royal court in the 1880’s. With the dawn of the radio broadcasting age, ukulele music owned the airwaves. Broadway produced ukulele musicals. Hollywood produced ukulele movie stars. The little instrument was so inexpensive and easy to play that by the early twenties the uke was the most popular instrument in the American home and the first musical voice for millions of children. Over the next thirty years the uke was number one, and then, with the rise of rock and roll guitar, faded into nerdy obscurity, until now.

In the internet age, the ukulele is making a comeback. Clubs and ensembles are sprouting up around the world, and a new generation is pulling their grandparents’ ukes out of the closet, challenging our images of the humble ukulele. Ukes top the charts in Japan, Swedish punks thrash uke angst, California popsters serve it to ya ukulele style, classical composers carefully pluck out musicbox sonatas, and all of them meet together at the myriad ukulele festivals from New York to London to Tokyo.

MIGHTY UKE travels the world to discover why so many people of different nations, cultures, ages and musical tastes are turning to the ukulele to express themselves, connect with the past, and with each other. From the Redwoods of California through the gritty streets of New York, from swinging London through Tokyo’s highrise canyons to Hawaii, ukers tell the story of the people’s instrument: The Mighty Uke.

ABOUT PETER LUONGO:
Peter Luongo has over 40-years of experience and expertise as a professional ukulele teacher working with children and adults and is a regular presenter at festivals around the world (U.S., Canada, and Europe). Peter is best known as the founder and former Musical Director of the internationally acclaimed Langley Ukulele Ensemble. He led the ensemble for over 3 decades during which time the group received numerous awards and accolades. They held annual performances at the Sheraton Waikiki Resort and had a prominent role in the award-winning documentary film, “The Mighty Uke.”

Peter also directs and instructs The Legacy Ukulele Ensemble made up of adult members from across America and Canada. This group has performed at festivals in Palm Springs, Reno, and Hawaii, and has participated at multiple NAMM Shows in Anaheim, California.