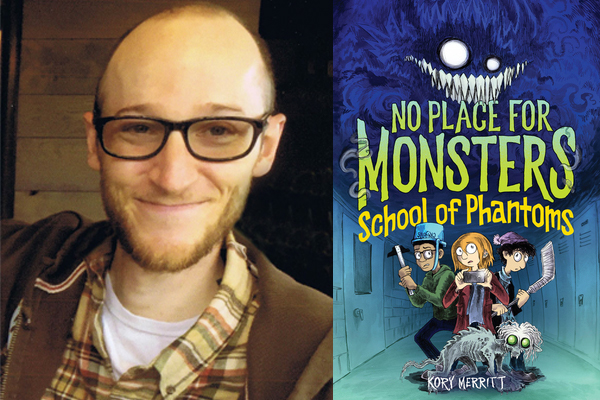 Blockbuster author Kory Merritt joins us for a virtual event to introduce his spine-tingling follow-up to his middle-grade book, NO PLACE FOR MONSTERS, which DIARY OF A WIMPY KID author Jeff Kinney called "wildly imaginative and totally terrifying". During this virtual event, Kory and Jeff will discuss Kory's new book SCHOOL OF PHANTOMS, about a group of unlikely friends who must band together to protect their town from the monsters that are threatening to destroy it. Save your spot in the free event below.

Kory has kindly signed bookplates for everyone purchasing SCHOOL OF PHANTOMS from An Unlikely Story, while supplies last.

ABOUT THE BOOK:
In this spine-tingling follow-up to No Place for Monsters, which Diary of a Wimpy Kid author Jeff Kinney called "wildly imaginative and totally terrifying," a group of unlikely friends must band together to protect their town from the monsters that are threatening to destroy it.

The storm is coming. Who will survive?

It’s been months since Levi and Kat defeated the Boojum and rescued their town’s forgotten children. But now the strangeness has started again: hundreds of creepy snowmen pop up across town and a bizarre blizzard hits the day before spring break.

Being trapped in the school overnight by freak weather is bad enough. But an evil is lurking . . . one far worse than ice and wind. Worse than power outages. Even worse than being stuck with teachers and annoying classmates.

Something is roaming the darkened school halls. Something . . . hungry. Now it’s up to a small group of student survivors—along with some supernatural helpers—to uncover the cold-hearted menace before it takes the entire school.

School of Phantoms (No Place for Monsters) (Hardcover)

No Place for Monsters (Hardcover)

By Jack Chabert, Kory Merritt (Illustrator), Jeff Kinney (From an idea by)
$9.95