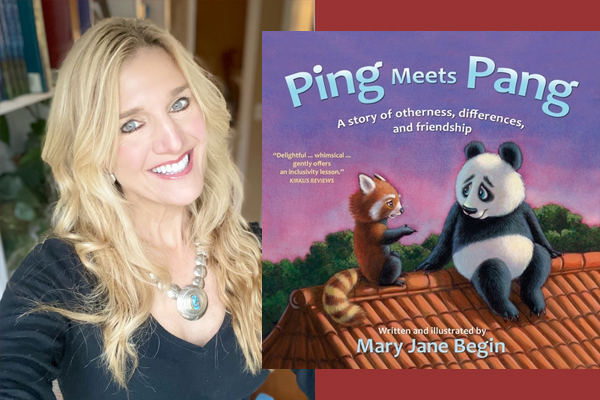 Join us in welcoming local award-winning author/illustrator Mary Jane Begin to our Second Story event space for an in-person storytime to celebrate her new picture book PING MEETS PANG. The book is a charming allegory about inclusiveness and acceptance told through two pandas. During this event, Mary will read her book and host a fun drawing game with the audience, followed by a signing. Register below to attend the free event.

ABOUT THE BOOK:
Ping and Pang are both Pandas, but they don't look a thing like one another and that's a problem. Each maintains they possess the true qualities of being a Panda; the correct color, the size and shape of their ears, the even fluffiness of their tails. It is only when they realize what they have in common do they slowly appreciate each other's differences.

The analogy to today's political and racial climate points to acceptance of the other side's differences and finding common ground.

PING MEETS PANG is an educational tool. It is an allegory about inclusiveness and acceptance of "the other" told through two pandas. The story is meant to spark discussions about multiculturalism and body positivity, and inspire the protection and conservation of pandas. Includes conversation starters for further instruction and participation

Author/illustrator Mary Jane Begin says of PING MEETS PANG: "While on a recent trip to China I had the chance to visit the world-famous Chengdu Panda Research Base. My hope was to have a glimpse these roly-poly creatures in person. While on tour through the sanctuary, I spotted a section with Red pandas. I thought these don't look like pandas, they look more like red raccoons I immediately imagined that the Red Panda would have a bit of a chip on its shoulder because everyone thinks a panda looks like a Giant Panda. When I came back to the States, I started sketching. Slowly the story transformed to be about two pandas who don't believe the other is actually a panda because they look and act so differently from each other."

ABOUT THE AUTHOR:
Mary Jane is an award-winning illustrator and author of numerous children's books, and professor in the Illustration Department at Rhode Island School of Design. She's also the Chair of Illustration in the M.F.A for Children's Literature at Hollins University. Her previous books include A MOUSE TOLD HIS MOTHER (Little Brown 25,000 HC, 131,00 PB), LITTLE MOUSE'S PAINTING (Morrow/Sea Star 120,100 HC, 21,000 PB). Mary Jane recently won the prestigious Big Xin Children's Literature Award in China for her book, Willow Buds; the Tale of Toad and Badger. She has received awards from the Society of Illustrators, Awards of Excellence from Communications Arts, and the Critici Erba Prize at the Bologna Book Fair as well as the Erma Simonton Black Award from the Bank Street College.