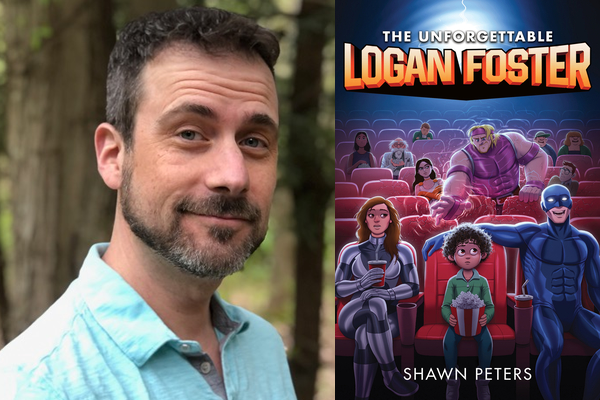 Get ready for a brand new, epic middle grade series from debut author Shawn Peters! THE UNFORGETTABLE LOGAN FOSTER is packed with superheroes, supervillains, and epic showdowns between good and evil. The first book in the series is action-packed and shows that sometimes being a hero is just about being yourself. During this event, Shawn will discuss and sign copies of his book. Register to attend the free event below.

All attendees will be required to wear masks at all times, no exceptions. If you cannot make the event but would still like a personalized copy of THE UNFORGETTABLE LOGAN FOSTER, please order it below before January 17th, and include the name of the person you'd like the book inscribed to in the "order comments" when checking out.

ABOUT THE BOOK:
Packed with superheroes, supervillains, and epic showdowns between good and evil, The Unforgettable Logan Foster from debut author Shawn Peter shows that sometimes being a hero is just about being yourself.

Logan Foster has pretty much given up on the idea of ever being adopted. It could have something to with his awkward manner, his photographic memory, or his affection for reciting curious facts, but whatever the cause, Logan and his “PP’s” (prospective parents) have never clicked.

Then everything changes when Gil and Margie arrive. Although they aren’t exactly perfect themselves—Gil has the punniest sense of humor and Margie’s cooking would have anyone running for the hills—they genuinely seem to care.

But it doesn’t take Logan long to notice some very odd things about them. They are out at all hours, they never seem to eat, and there’s a part of the house that is protected by some pretty elaborate security.

No matter what Logan could have imagined, nothing prepared him for the truth: His PP’s are actually superheroes, and they’re being hunted down by dastardly forces. Logan’s found himself caught in the middle in a massive battle and the very fate of the world may hang in the balance. Will Logan be able to find a way to save the day and his new family?

ABOUT THE AUTHOR:
Shawn Peters is a husband and father of two living in Metrowest Massachusetts who has written a little bit about a lot of things in a lot of places. His career includes ads for for massive brands, fantasy sports articles for ESPN, TV scripts for makeover shows and cop car crashes, and even essays about domestic date-nights that ran on the back page of The Boston Globe Sunday Magazine. Now, his debut MG superhero adventure novel, “The Unforgettable Logan Foster” will be released by HarperCollins on January 4, 2022, with a sequel planned for a year later.