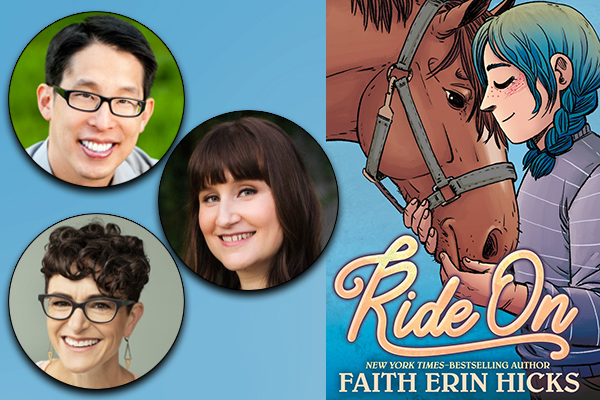 Faith Erin Hicks, Eisner award-winning and New York Times bestselling comic creator, has an incredible new graphic novel called RIDE ON, and she's joined with some very special friends to introduce it with us: Kristin Varner and Gene Luen Yang! These three crazy-talented graphic novel creators will discuss RIDE ON, creating graphic novels, and much more in an event not to be missed. So RIDE ON over to Crowdcast and save your spot!

ABOUT THE BOOK: In this middle grade graphic novel, twelve-year-old Victoria is burned out from the high-pressure world of riding competitions. Can she get back to basics and rekindle her love of horses?

Victoria thought all she wanted in life was to ride, train, and study horses. But after all the pressure from competitions, and a falling out with her best friend Taylor, Victoria takes a step back from everything. She starts attending Edgewood Stables, a smaller riding facility, with the goal to renew her love for horses.

But of course things could never be simple. At Edgewood Stables she is faced with the challenge of schooling a new horse named Quinn while dealing with the rocky personality of Norrie, the queen bee who is making everyone ignore Victoria. Things come to a head at the Waverly Stable’s annual schooling show, where Victoria has to compete with Quinn and also face her ex-best friend!

Faith Erin Hicks is a writer and artist who lives in Vancouver, Canada. Her published works include Friends with Boys, The Adventures of Superhero Girl, The Last of Us: American Dreams (with Neil Druckmann), The Nameless City trilogy, Comics Will Break Your Heart, and the New York Times bestselling Pumpkinheads (with Rainbow Rowell).

Kristin Varner grew up in the Rocky Mountains of Utah, where she fell in love with horses at a young age. Kristin received her degree in illustration from Rhode Island School of Design and has created art for children’s books, magazines, games, apparel, and toys. Horse Trouble is her debut title as an author and graphic novelist. She lives in Seattle, Washington, with her husband and daughter and she's still a little crazy about horses.

Gene Luen Yang writes, and sometimes draws, comic books and graphic novels. As the Library of Congress’s fifth National Ambassador for Young People’s Literature, he advocates for the importance of reading, especially reading diversely. His graphic novel American Born Chinese, a National Book Award finalist and Printz Award winner, has been adapted into a streaming series on Disney+. His two-volume graphic novel Boxers & Saints won the LA Times Book Prize and was a National Book Award finalist. His nonfiction graphic novel Dragon Hoops received an Eisner Award and a Printz honor. His other comics works include Secret Coders (with Mike Holmes), The Shadow Hero (with Sonny Liew), as well as Superman Smashes the Klan and the Avatar: The Last Airbender series (both with Gurihiru). In 2016, he was named a MacArthur Foundation Fellow.