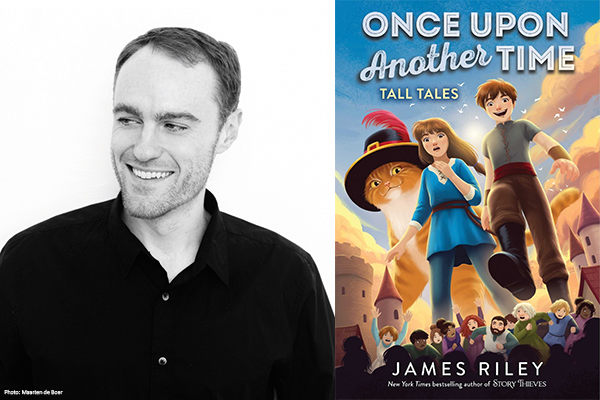 Leave the real world behind and join us for a magical event with New York Times bestselling author James Riley where he'll introduce the second in his trilogy of twisted fairy tales: TALL TALES! Storybook characters collide in this second adventure and James Riley will guide you through the fairy queens, giants and genies, and the Golden King. After James talks about TALL TALES, he'll answer audience questions and sign books! Save your spot in this free event below!

ABOUT TALL TALES:
The second book in a new trilogy of twisted fairy tales from New York Times bestselling author James Riley, set in the world of his popular Half Upon a Time series, that’s perfect for fans of Fablehaven and Chris Colfer’s A Tale of Magic series!

Lena might finally be accepted by the other giants after helping to defeat the Golden King and his faceless army in the Cursed City, but that doesn’t mean life has become any easier for her. The power-hungry Golden King wants revenge and has begun spreading shadow magic out over the kingdoms, taking over the minds of anyone it touches, and instilling fear and hatred as it goes.

The fairy queens, the most magical beings in the kingdoms, say their sacred book, Tales of All Things, claims that there is one person who can defeat the Golden King and his dark spells: Lena. But only if she first proves herself worthy by completing three challenges.

All Lena ever wanted was to prove she is really a giant. Now she has to be so much more. Can she and her genie friend, Jin, save the human world that doesn’t trust them, or will they fall prey to shadow magic, and doom everything?

ABOUT THE AUTHOR:
James Riley lives in Virginia. He is the New York Times bestselling author of the Half Upon a Time, Story Thieves, and Revenge of Magic series.

Tall Tales (Once Upon Another Time #2) (Hardcover)

Once Upon Another Time (Hardcover)