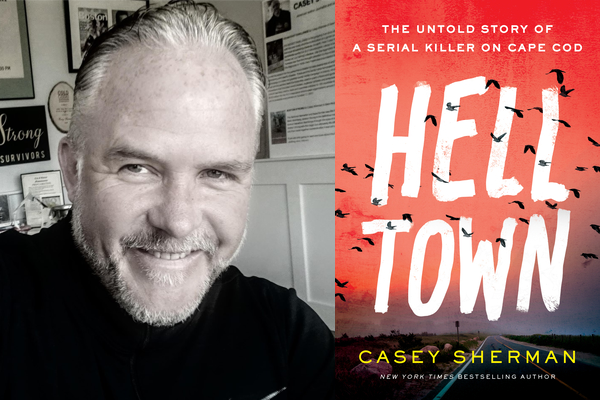 Renowned author and Cape Cod native Casey Sherman celebrates the release of his new true crime novel HELLTOWN in this in-person event. Before Charles Manson, there was Tony Costa—the serial killer of Cape Cod. "Master storyteller Casey Sherman takes us back in time to the 1960s and into the dark mind of a charismatic serial killer. Set against the idyllic backdrop of Cape Cod, Helltown is a riveting, often spine-tingling true crime story." (Terence Winter, Executive Producer of The Sopranos) During the event, Casey will read from and discuss his book, followed by a signing. Robert Downey Jr.’s production company, Team Downey, has acquired the rights to HELLTOWN and is fast-tracking a limited TV series! Register to attend this free event below.

If you cannot make the event but would like a signed book from Casey, order it below by July 13th and include the name of the person you would like the book inscribed to in the "order comments" when checking out.

ABOUT THE BOOK:
Before Charles Manson, there was Tony Costa—the serial killer of Cape Cod

1969: The hippie scene is vibrant in Provincetown, Massachusetts. Long-haired teenagers roam the streets, strumming guitars and preaching about peace and love... and Tony Costa is at the center of it all. To a certain group of smitten young women, he is known as Sire—the leader of their counter-culture movement, the charming man who speaks eloquently and hands out hallucinogenic drugs like candy. But beneath his benign persona lies a twisted and uncontrollable rage that threatens to break loose at any moment. Tony Costa is the most dangerous man on Cape Cod, and no one who crosses his path is safe.

When young women begin to disappear, Costa's natural charisma and good looks initially protect him from suspicion. But as the bodies are discovered, the police close in on him as the key suspect. Meanwhile, local writers Kurt Vonnegut and Norman Mailer are locked in a desperate race to secure their legacies as great literary icons—and they both set their sights on Tony Costa and the drug-soaked hippie culture that he embodies as their next promising subject, launching independent investigations that stoke the competitive fires between two of the greatest American writers.

Immersive, unflinching, and shocking, Helltown is a landmark true crime narrative that transports us back to the turbulent late 1960s, reveals the secrets of a notorious serial killer, and unspools the threads connecting Costa, Vonnegut, and Mailer in the seaside city that played host to horrors unlike any ever seen before. New York Times bestselling author Casey Sherman has crafted a stunner.

"Master storyteller Casey Sherman takes us back in time to the 1960s and into the dark mind of a charismatic serial killer. Set against the idyllic backdrop of Cape Cod, Helltown is a riveting, often spine-tingling true crime story." — Terence Winter, Executive Producer of The Sopranos, creator of Boardwalk Empire

"With Helltown, Casey Sherman delivers the kind of true crime that keeps eyes glued to the pages—smart, impeccably researched, and utterly absorbing. Destined to be on all the year-end best nonfiction lists, this is an unqualified triumph by a writer at the top of his game!" — Gregg Olsen, #1 New York Times bestselling author of If You Tell

"Searing and important, Helltown is an immaculately researched and rivetingly propulsive chronicle illustrating a pivotal part of our history. Brilliantly weaving together true crime, a grotesque criminal, the political landscape, and the brilliant minds who wrote about it—Casey Sherman is a master at bringing history alive. Compelling, complex, and revealing—do not miss this!" — Hank Phillippi Ryan, USA Today bestselling author of Her Perfect Life

ABOUT THE AUTHOR:
Casey Sherman – Considered one of America’s premier true crime writers, Sherman is the renowned author of 15 books including James Patterson’s The Last Days of John Lennon, which spent 16 weeks on the NY Times Bestsellers List in 2020 & 2021,  The Finest Hours, the Cape Cod maritime classic adapted for the 2016 Walt Disney Pictures film starring Chris Pine and Casey Affleck, and Boston Strong, adapted into the 2016 CBS Films feature, Patriots Day starring Mark Wahlberg. He is co-host of the popular true crime podcast  Saints, Sinners & Serial Killers. Sherman is a Cape Cod native and contributing writer for The Washington Post, TIME, Esquire, Boston Magazine, Boston Common and was a weekly featured columnist for The Boston Herald. Sherman was born into true crime. His aunt, Mary Sullivan, was the last victim of the Boston Strangler. Sherman re-investigated the case to worldwide acclaim and later wrote about his journey in his book, A Rose for Mary. Sherman is a sought after guest analyst who has appeared on more than 100 television programs and networks including: GMA, NBC’s The Today Show, ABC World News Tonight, CNN, MSNBC, CNBC, C-SPAN, FOX News, Dateline NBC, CBS This Morning, The CBS Evening News, CBS 48 Hours, History Channel, Discovery, and The View.

Helltown: The Untold Story of a Serial Killer on Cape Cod (Hardcover)

Hunting Whitey: The Inside Story of the Capture & Killing of America's Most Wanted Crime Boss (Paperback)