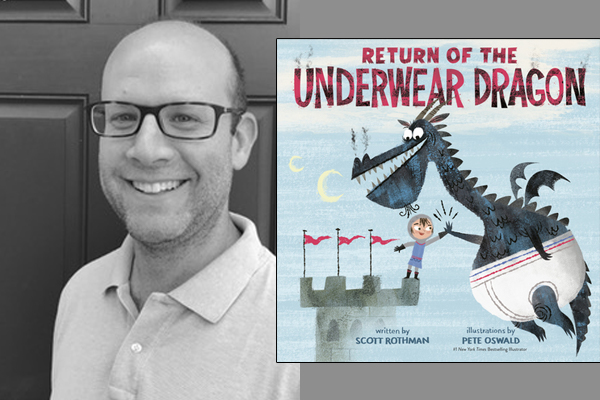 Scott Rothman, author of the laugh-out-loud picture book ATTACK OF THE UNDERWEAR DRAGON joins us for another virtual storytime event to celebrate the hilarious sequel, RETURN OF THE UNDERWEAR DRAGON! Once again, Sir Cole sets out on a valiant quest. This time it isn't to conquer the Underwear Dragon--it's to help him learn how to read. After the reading, Scott will answer audience questions. Save your spot in the free event below.

Scott has kindly signed bookplates for everyone who purchases RETURN OF THE UNDERWEAR DRAGON from An Unlikely Story, while supplies last.

ABOUT THE BOOK:
In this sequel to the hilarious picture book Attack of the Underwear Dragon, brave Sir Cole teaches his former sworn enemy to read.

Once again, Sir Cole sets out on a valiant quest. This time it isn't to conquer the Underwear Dragon--it's to help him learn how to read. But it's hard to teach a fire-breathing creature to read an actual book because he sets them all on fire. And when the Underwear Dragon finally succeeds, Sir Cole presents his star pupil with the perfect gift--gigantic alphabet underwear!

ABOUT THE AUTHOR:
SCOTT ROTHMAN is a writer of humor pieces and screenplays, including Draft Day and Army of One, both of which he co-wrote with Rajiv Joseph. Scott is a graduate of Colby College and received an MFA in dramatic writing from New York University's Tisch School of the Arts. His humor writing has appeared in various publications, including the New Yorker, GQ, and McSweeney's. He lives in Connecticut with his wife and three children. This is his first picture book.

Return of the Underwear Dragon (Hardcover)

Attack of the Underwear Dragon (Hardcover)