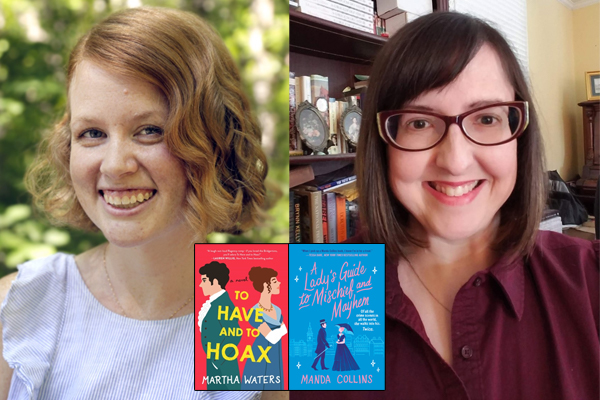 Join us in celebrating Bookstore Romance Day with rom-com authors Martha Waters and Manda Collins. Martha is the author of the popular REGENCY VOWS series. The first book in the series, TO HAVE AND TO HOAX, got rave reviews and the second book in the series, TO LOVE AND TO LOATH, was named a most anticipated romance by Oprah Daily, BuzzFeed, and more! Manda's novel, A LADY'S GUIDE TO MISCHIEF AND MAYHEM, is a fun historical rom-com that fans of Julia Quinn, and Netflix's ENOLA HOLMES will love! During this virtual event, Martha and Manda will discuss their books, writing in the romance genre, and answer audience questions. Save your spot in the free event below!

Martha and Manda have kindly signed bookplates for attendees who purchase their books from An Unlikely Story, while supplies last.

ABOUT TO HAVE AND TO HOAX:
Named a Best Romance of April by Goodreads, Popsugar, Bustle, and more!

“A laugh out loud Regency romp—if you loved the Bridgertons, you’ll adore To Have and to Hoax!” —Lauren Willig, New York Times bestselling author

In this fresh and hilarious historical rom-com, an estranged husband and wife in Regency England feign accidents and illness in an attempt to gain attention—and maybe just win each other back in the process.

Five years ago, Lady Violet Grey and Lord James Audley met, fell in love, and got married. Four years ago, they had a fight to end all fights, and have barely spoken since.

Their once-passionate love match has been reduced to one of cold, detached politeness. But when Violet receives a letter that James has been thrown from his horse and rendered unconscious at their country estate, she races to be by his side—only to discover him alive and well at a tavern, and completely unaware of her concern. She’s outraged. He’s confused. And the distance between them has never been more apparent.

Wanting to teach her estranged husband a lesson, Violet decides to feign an illness of her own. James quickly sees through it, but he decides to play along in an ever-escalating game of manipulation, featuring actors masquerading as doctors, threats of Swiss sanitariums, faux mistresses—and a lot of flirtation between a husband and wife who might not hate each other as much as they thought. Will the two be able to overcome four years of hurt or will they continue to deny the spark between them?

With charm, wit, and heart in spades, To Have and to Hoax is a fresh and eminently entertaining romantic comedy—perfect for fans of Jasmine Guillory and Julia Quinn.

ABOUT TO LOVE AND TO LOATH:
Named a most anticipated romance by Oprah Daily, Marie Claire, BuzzFeed, PopSugar, and more!

The author of the “hilarious...joyful, elegant” (Publishers Weekly, starred review) To Have and to Hoax returns with an effervescent, charming, and swoon-worthy novel about a man and woman who never agree on anything—until they agree to a no-strings-attached affair in this Regency-era romp.

The widowed Diana, Lady Templeton and Jeremy, Marquess of Willingham are infamous among English high society as much for their sharp-tongued bickering as their flirtation. One evening, an argument at a ball turns into a serious wager: Jeremy will marry within the year or Diana will forfeit one hundred pounds. So shortly after, just before a fortnight-long house party at Elderwild, Jeremy’s country estate, Diana is shocked when Jeremy appears at her home with a very different kind of proposition.

After his latest mistress unfavorably criticized his skills in the bedroom, Jeremy is looking for reassurance, so he has gone to the only woman he trusts to be totally truthful. He suggests that they embark on a brief affair while at the house party—Jeremy can receive an honest critique of his bedroom skills and widowed Diana can use the gossip to signal to other gentlemen that she is interested in taking a lover.

Diana thinks taking him up on his counter-proposal can only help her win her wager. With her in the bedroom and Jeremy’s marriage-minded grandmother, the formidable Dowager Marchioness of Willingham, helping to find suitable matches among the eligible ladies at Elderwild, Diana is confident her victory is assured. But while they’re focused on winning wagers, they stand to lose their own hearts.

With Martha Waters’s signature “cheeky charm and wonderfully wry wit” (Booklist, starred review), To Love and to Loathe is another clever and delightful historical rom-com that is perfect for fans of Christina Lauren and Evie Dunmore.

ABOUT A LADY'S GUIDE TO MISCHIEF AND MAYHEM:
"[Manda] Collins is a delight" (Elizabeth Hoyt) in this fun and flirty historical rom-com, where an intrepid female reporter matches wits with a serious, sexy detective -- perfect for fans of Tessa Dare, Julia Quinn, and Netflix's Enola Holmes!
England, 1865: Newspaper columnist Lady Katherine Bascomb finds herself the subject of speculation when her latest article leads to an arrest in the murders plaguing London. The English believe women ought not to write about such vulgar things as crime, and a particularly attractive detective inspector is incensed that she's interfered with his investigation. To escape her sudden notoriety, Katherine heads to the country-only to witness a murder upon her arrival.
Detective Inspector Andrew Eversham is appalled when Lady Katherine entangles herself in one of his cases-again. Her sensationalist reporting already nearly got him kicked off the police force, and he'll be damned if he permits her to meddle a second time. Yet, her questions are awfully insightful, and he can't deny his attraction to both her beauty and brains. As the clues point to a dangerous criminal, the two soon realize their best option is working together. But with their focus on the killer lurking in the shadows, neither is prepared for the other risk the case poses-to their hearts.

ABOUT THE AUTHORS:
Martha Waters is the author of To Have and to Hoax, To Love and to Loathe, and To Marry and to Meddle. She was born and raised in sunny south Florida and is a graduate of the University of North Carolina at Chapel Hill. She lives in coastal Maine, where she works as a children’s librarian by day, and loves sundresses, gin cocktails, and traveling.

Manda Collins grew up on a combination of Nancy Drew books and Jane Austen novels, and her own brand of historical romantic suspense is the result. A former academic librarian, she holds master's degrees in English and Library & Information Studies. Her novel Duke with Benefits was named a Kirkus Best Romance of 2017. She lives on the Gulf Coast with two lazy cats, a very spoiled Shih Tzu, and more books than are strictly necessary.

To Have and to Hoax: A Novel (The Regency Vows #1) (Paperback)

To Love and to Loathe: A Novel (The Regency Vows #2) (Paperback)

To Marry and to Meddle: A Novel (The Regency Vows #3) (Paperback)

A Lady's Guide to Mischief and Mayhem (Paperback)

An Heiress's Guide to Deception and Desire (Paperback)