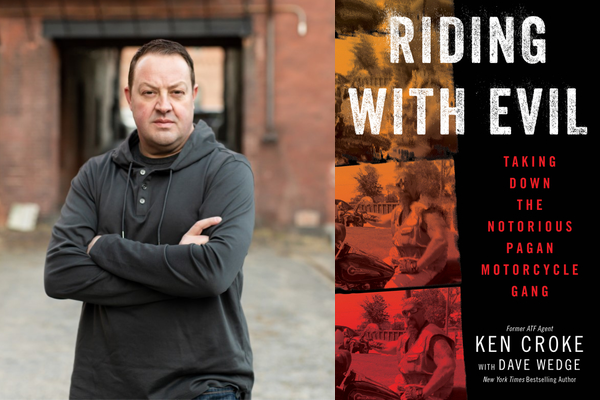 Dave Wedge, writer for Boston magazine and former award-winning investigative journalist for the Boston Herald, joins An Unlikely Story to share his co-written true-crime biography, RIDING WITH EVIL. It's the Sons of Anarchy meets The Departed in this fast-paced memoir from former ATF agent Ken Croke, the first federal agent to successfully infiltrate the infamous Pagan Motorcycle Club, a white supremacist biker gang. Croke tells the story of his terrifying undercover life in the Pagans with help from Wedge, and together they deliver a nail-biting account of the secretive and brutal biker underworld. During the event, Wedge will discuss the research behind the book, answer questions, and sign copies. Register to attend this free event below.

If you cannot make the event but would like a personalized copy of the book, please order it from our website by August 21st and include the name of the person you would like your book inscribed to in the "order comments".

Longtime ATF agent Ken Croke had earned the right to coast to the end of a storied career, having routinely gone undercover to apprehend white supremacists, gun runners, and gang members. But after a chance encounter with an associate of the Pagan Motorcycle Gang created an opening, he transformed himself into “Slam,” a monstrous, axe-handle wielding enforcer whose duty was to protect the leadership “mother club” at all costs. He befriended the club’s most violent and criminally insane members and lived among them for two years, covertly building a case that would eventually take down the top members of the gang in a massive federal prosecution, even as he risked his marriage, his sanity, and his life. With today’s law enforcement largely moving toward the comparative safety of cyber operations, it became one of the last of its kind, a masterclass in old school tactics that marked Croke as a dying breed of undercover agent and became legendary in law enforcement.

Now for the first time, Croke tells the story of his terrifying undercover life in the Pagans—the unspeakable violence, extremism, drugs, and disgusting rituals. Written with bestselling crime writer Dave Wedge and utilizing the exclusive cooperation of those who lived the case with him, as well as thousands of pages of court files and hours of surveillance tapes and photos, Croke delivers a frightening, nail-biting account of the secretive and brutal biker underworld.

ABOUT THE AUTHOR:
Dave Wedge is a New York Times bestselling author, podcaster and writer based in Boston. He has co-written five books with acclaimed author Casey Sherman, including “Boston Strong: A City's Triumph Over Tragedy,” a non-fiction drama about the 2013 Boston Marathon Bombings adapted for the 2017 movie “Patriots Day”; “12: The Inside Story of Tom Brady's Fight for Redemption"; “Hunting Whitey: The Inside Story of the Capture and Killing of America’s Most Wanted Crime Boss”; and “The Last Days of John Lennon,” written with James Patterson.

Dave is also a writer for Boston magazine, has written for VICE, Esquire, and Newsweek and was an award-winning investigative journalist for the Boston Herald for 14 years. He has appeared on CNN, MSNBC, E!, France 24, Fox News Channel, Good Morning America and many other local and national networks. He is co-host of the acclaimed true crime podcast “Saints, Sinners & Serial Killers” on the MuddhouseMedia network. Find him on Twitter @DaveWedge or Instagram @davidmwedge.

Hunting Whitey: The Inside Story of the Capture & Killing of America's Most Wanted Crime Boss (Paperback)