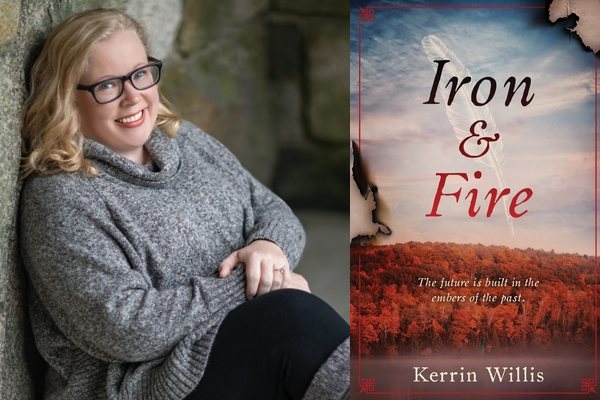 Local author and teacher Kerrin Willis visits An Unlikely Story to share her historical fiction novel IRON & FIRE. Set against the backdrop of King Philip’s War, IRON & FIRE explores the experience of a clever, educated woman at a time when being so often resulted in death. It's a riveting debut that readers won't want to put down. Register to attend the free event below.

If you cannot make the event but would like a personalized copy of Willis' book, please order it on our website by August 10th and include the name of the person you would like your book inscribed to in the "order comments".

Verity Parker promised to look after her family.

Raised among the bookshops and turmoil of Reformation London, Verity now finds herself in Puritan New England, where she must learn to keep her head down and her mouth shut, or risk dire consequences. The only person who values her tenacity is Kit, the heretical ironworker she has been forbidden to see. When King Philip’s War breaks out, Verity must stay silent as the Puritan elders spread hateful rhetoric about the “savages” in the forest. When she witnesses a young girl die in childbirth, Verity must stand by as neighbors blame God’s vengeance.  But when tragedy strikes her own home, Verity must choose between her duty to her family and her love for  Kit. Will she choose to keep the peace,or will she defy the leaders of the colony for a chance at happiness?
Set against the backdrop of King Philip’s War, the bloodiest war per capita in American history, Iron & Fire explores the experience of a clever, educated woman at a time when being so often resulted in death. Perfect for fans of Amy Belding Brown’s Flight of the Sparrow,  or Elizabeth George Speare’s The Witch of Blackbird Pond, Iron & Fire was written for those who read the original American Girl series as children and are now all grown up.

ABOUT THE AUTHOR:
Kerrin Willis lives in Southeastern Massachusetts with her two daughters and her dog, Austen. She is a high school English teacher who prides herself on being a feminist and a strong protagonist in her own story, and she would probably have been burned as a witch in colonial New England. Kerrin can usually be found pausing The Little Mermaid and subjecting her daughters to a lecture on the dangers of giving up their voices. Kerrin has a BA in English from Stonehill College, and MA in English from Simmons College, and is currently working on her MFA in Fiction from Southern New Hampshire University