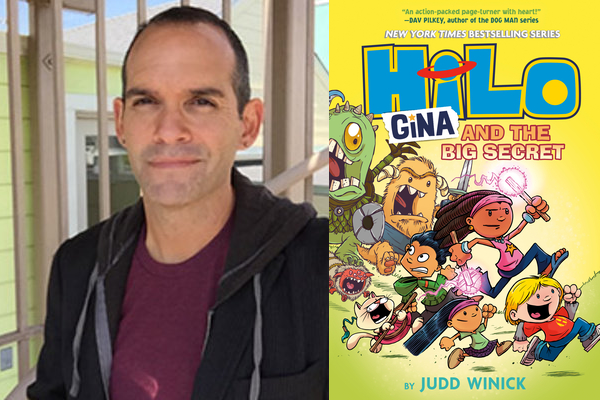 We are thrilled to once again host Judd Winick, creator of the beloved New York Times bestselling middle grade graphic novel series, HILO, in a virtual event with DIARY OF A WIMPY KID author Jeff Kinney! In HILO BOOK #8: GINA AND THE BIG SECRET, your favorite characters are back to save the world in a laugh-out-loud, action-packed adventure filled with epic battles, true friendship, good jokes, bad jokes, hilarious monsters, spoiled royals, prophecies, and more! During this event, Judd and Jeff will discuss HILO, answer audience questions, followed by a hilarious draw-off! Save your spot in the free event below.

Customers who order HILO BOOK #8: GINA AND THE BIG SECRET from An Unlikely Story will receive a custom autographed HILO bookplate from Judd Winick, while supplies last.

ABOUT THE BOOK:
"An action-packed page turner with heart!" --Dav Pilkey, author of DOG MAN

Your favorite characters are BACK and on an EPIC quest to save the world in the newest book in the New York Times bestselling graphic novel series that kids and critics love!

There's a NEW Earth! The world's timeline has been turned upside down, and now magical creatures are EVERYWHERE. Gina has to fix things--FAST!

With DJ and HILO's help, can Gina find the key to turn the world back to what it was? Find out in Hilo 8--a laugh-out-loud, action-packed adventure filled with epic battles! True friendship! Good jokes! Bad jokes! Giant (hilarious) monsters! Spoiled royals! Prophecies! Good! Evil! And much, much more!

ABOUT THE AUTHOR:
JUDD WINICK is creator of the beloved New York Times bestselling Hilo series. Judd lives in San Francisco with his wife and their two kids. Judd has written bestselling comic book series, appeared as a cast member of MTV's The Real World: San Francisco, and is the author of the acclaimed graphic novel Pedro and Me, about his Real World friend, AIDS activist Pedro Zamora. Visit Judd and Hilo online at juddspillowfort.com or find him on Twitter at @JuddWinick.

Hilo Book 1: The Boy Who Crashed to Earth (Paperback)

Hilo Book 1: The Boy Who Crashed to Earth (Hardcover)